Yvonne Buckley is the Chair of Zoology at Trinity College Dublin, Ireland. She is a quantitative ecologist with a research focus at population and community scales with applications in management of invasive species, habitat restoration, conservation and climate change adaptation. She spent a decade studying and working in the UK at Oxford and Imperial College London, followed by a decade working at the University of Queensland before returning to Ireland in 2014.

Yvonne is passionate about globally distributed team science projects and is involved in the Nutrient Network (NutNet) and also Plantpopnet, a spatially distributed model system for population ecology to determine the environmental drivers of population dynamics.

Why I became an ecologist?

It is difficult to pinpoint just one inspirational moment that defined my wish to be an ecologist.

I was surrounded by animals and plants as a child in the Irish countryside and devoured Gerald Durrell’s “My Family & Other Animals” which seemed incredibly exotic. I loved the idea of travelling to new places and ecology seemed like a great way to work outdoors and see the world.

At College in Oxford I was converted to plants by my tutor David Mabberley, a systematist, and I read Harper (population biology) and Takhtajan (plant evolutionary relationships). I indulged my wanderlust with field trips to Turkey to count White-headed ducks, Mexico to look at tree size distributions, and Vietnam to promote a BP funded conservation programme.

At some point I read Bob May’s paper on chaos and McArthur & Wilson’s beautiful Theory of Island Biogeography book which together convinced me of the necessity to improve my modelling skills. 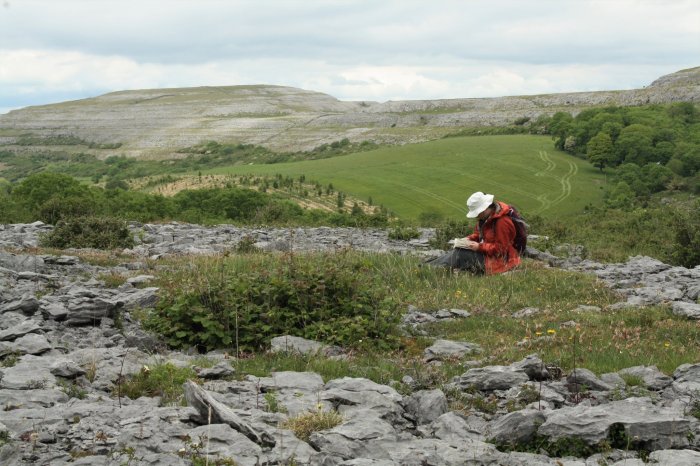 Yvonne at one of her NutNet and Plantpopnet sites in the floristically diverse Kaarst landscape of the Burren, Ireland.

Mark Rees at Silwood Park pushed me in at the deep end and within a few weeks of starting my PhD I was nervously sitting on a plane to Switzerland, tasked with building a model of an invasive plant, scentless chamomile (Tripleurospermum perforatum), with Harriet Hinz from CABI. Rosie Hails had taught me statistics as an undergraduate & I used her introduction to modelling book to develop what was my first population model. A couple of weeks later on the plane on the way home I did my first “cobweb” graphical analysis of Harriet’s data and was hooked on quantitative approaches.

I have been hugely inspired by women who have excelled while combining their career with having a family. Jane Memmott has been a great role model and mentor. At times it looked like being an academic ecologist was not compatible with having a family but seeing success stories like Jane’s kept me in the game.

I hope now that more post-grads and post-docs will have the role models and crucially, the fellowship funding opportunities to enable them to combine a rewarding academic career with an equally rewarding life outside academia, whether that includes children or not. Fellowships, particularly at early & mid career stages, give us the time and space to recognise inspiration when it hits and the resources to follow inspiration through to a completed project, paper and/or application.