Mallards are among the most abundant and widespread duck species in the world, yet little attention has been paid to date to their role in spreading plant seeds. A new study in Journal of Ecology reveals a number of plants that were not previously known to be part of the diet of waterbirds. 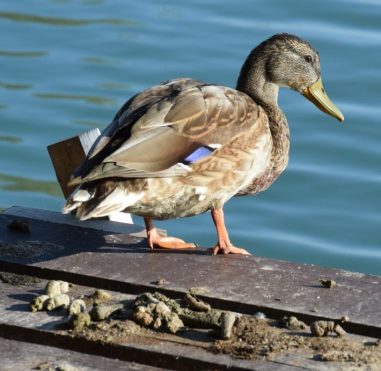 Mallards pick up seeds when feeding on or below the water surface, or on land within a few metres of water. Many of these seeds are not digested and survive gut passage intact, and as a result these dabbling ducks transport and disperse seeds and spores of a broad range of aquatic and terrestrial plants in a process called ‘endozoochory’.

Ducks are usually thought to disperse seeds primarily on the outside when stuck in the feathers, or in mud on their feet or their bill.

To study which plants are dispersed by mallards during their autumn migration period, researchers from the University of Debrecen (Hungary) and Estación Biológica de Doñana (Spain) collected over 200 faecal samples in two protected wetland regions of Hungary, one of which is at Lake Balaton, central Europe’s largest freshwater lake.

They recovered seeds of 21 flowering plants (including 13 terrestrial species), many of which were not previously known to be dispersed by ducks. These new species include the brown galingale (Cyperus fuscus), which is threatened in the UK but common in Hungary. Even more excitingly, the ecologists also found viable spores of floating watermoss (Salvinia natans) in 32 samples, providing the first field demonstration of endozoochory of ferns by birds.

Adam Lovas-Kiss, PhD student at the University of Debrecen, led this study:

“Our study shows that these spores can be more widely spread thanks to waterbirds that eat and excrete them again intact.”

Mallards usually fly between sites where they feed and roost, travelling up to 20km in less than half an hour, and therefore play an important role in transporting and dispersing seeds and spores. When feeding before migrating to their wintering grounds in the eastern Mediterranean and Black Sea area, mallards may be able to spread these for hundreds of kilometres. Hungarian mallards have been recorded spanning from Russia in the East to France in the West.

“In the case of ferns, there are only a few other animals, such as deer, mice and fruit bats that have been reported to move them over broad distances”, Lovas-Kiss adds.

Endozoochory has been well studied in birds that eat plants with a freshy fruit and ingest the seeds inside (frugivores), however, this is the first field study of granivorous waterbirds to study the dispersal of both terrestrial and aquatic plants in such detail through faecal analysis.

Interestingly, the researchers also recorded seeds of two alien plant species. The majority of all seeds recorded was of the common fig (Ficus carica), however, its seeds failed to germinate and are not considered an issue in Hungary.

They also found a seed of the common hackberry (Celtis occidentalis), indicating that mallards could facilitate the spread of this park tree from North America, potentially causing problems in new natural habitats.

Dr Andy J. Green from the Estación Biológica de Doñana in Seville, who co-authored this paper, concludes: “Our findings underline how much remains to be learned about which plant seeds are distributed by migratory waterbirds. The list is still very incomplete and it is likely that ducks spread the seeds of thousands of plant species in Europe.”