Eminent ecologist David W. Goodall passed away a few weeks ago at the age of 104. David was well known for his work in plant community ecology, notably through major advances in statistical methods to analyze vegetation patterns. His friend, Peter Minchin (SIUE, USA) kindly proposed to write some words about David’s research over his long and successful career as an ecologist.

My friend and distinguished colleague, David W. Goodall, passed away on 10 May, 2018, aged 104. David was born 4 April, 1914 in Edmonton, England. He received his B.Sc. degree in 1935 and a Ph.D. in 1941 from the Imperial College of Science and Technology, London. His doctoral research on assimilation in the tomato plant was performed at East Malling Research Station in Kent. Though he applied to join the Royal Navy, his research was considered more important for the war effort.

David retired from the position of Senior Principal Research Scientist in CSIRO in 1979. He continued to work until 1998 as an Honorary Research Fellow in the CSIRO Division of Wildlife and Ecology and then from 1998 until 2018 as an Honorary Research Associate at the Centre for Ecosystem Management at Edith Cowan University. During his career, David supervised four Ph.D. and ten Master’s students. He served as Editor-in-Chief of the 30-volume series “Ecosystems of the World”, completing the final volume in 2005. 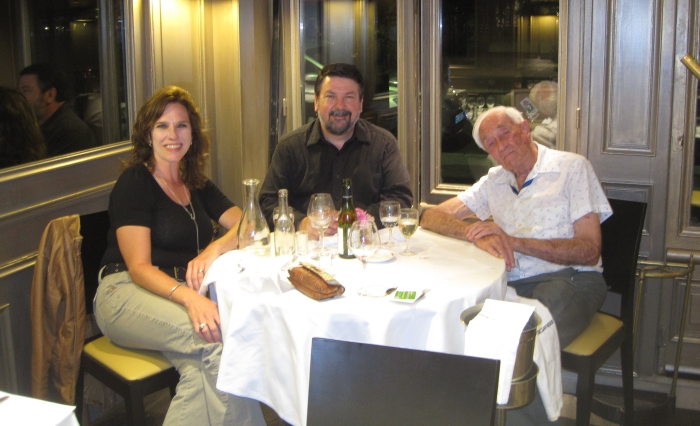 From right to left, David Goodall, Peter Minchin and Loretta Battaglia (Associate Professor, SIU Carbondale, USA, and Peter’s wife) at a restaurant in Lyon during the IAVS 2011 conference.

Among the honours and awards received by David were a Doctor of Science Nat. honoris causa from the Università degli Studi di Trieste, Italy in 1990, the Distinguished Statistical Ecologist Award from the International Association for Ecology in 1994, the Gold Medal of the Australian Ecological Society in 2008, and an Honorary Membership of the International Association for Vegetation Science (IAVS) in 1997. A special issue of the journal Plant Ecology was dedicated to Goodall in 2015 and he was made a Member of the Order of Australia in 2016 for “significant service to science as an academic, researcher and author in the area of plant ecology and natural resources management.”

David’s research made important contributions to plant physiology, ecosystem modelling, and the statistical analysis of ecological data. In a series of papers entitled “Objective Methods for the Classification of Vegetation I, II, III and IV”, he published pioneering research that laid the groundwork for the development of numerical methods to analyze vegetation and coined the term ‘‘ordination’’ for techniques that arrange vegetation samples in a coordinate space, rather than dividing them into groups. When I was a young student at the University of Tasmania, Goodall’s papers on quantitative methods influenced me profoundly and stimulated me to undertake a Ph.D. on ordination methods and pursue a career in vegetation analysis.

I first met David in 1988 at a conference of the IAVS in Vienna. We struck up an instant friendship and he told me anecdotes about his early work on vegetation analysis. His first application of principal components analysis to the ordination of vegetation was done at the University of Melbourne using a mechanical calculator. The computations took about six months to complete, after which he repeated the entire analysis to check his results. We remained in touch by correspondence and met up on several occasions over the years, most recently at the IAVS conferences in Lyon, France, in 2011 and Perth, Australia, in 2014. I found David to be an engaging and outgoing man, who enjoyed a good dinner and a few glasses of wine. His interests extended beyond science, as an actor and singer in theatre and musical productions.

In recent years, David’s quality of life had deteriorated greatly. He could no longer work in the field, he lost his senses of taste and smell, and his eyesight became too weak to read or communicate via e-mail. When faced with the reality that he could no longer live independently, he made the decision to voluntarily end his life at a clinic in Liestal, Switzerland. For several decades, David had been an advocate for the legalization of voluntary euthanasia in Australia. Though I am saddened to have lost a friend and colleague, I am glad that David was able to end his long and productive life with dignity and on his own terms. He will be missed.