In this new fieldwork post, Stephanie Yelenik, from the US Geological Survey (Pacific Island Ecosystems Research Center), shares some pictures of her fieldwork on forest restoration in Hawai’i.

Enjoy these beautiful pictures! More photo collections can be viewed in the fieldwork section of the blog. 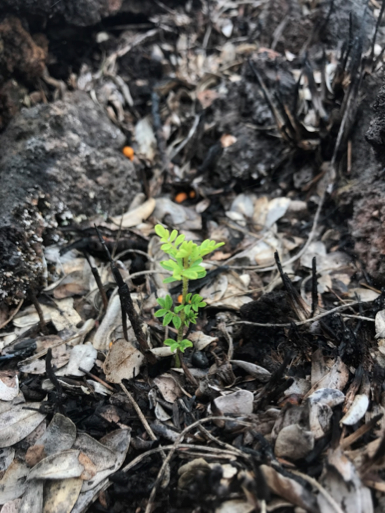 A brand new seedling of māmane (Sophora chrysophylla) recruiting after the Keauhou Fire in Hawai’i Volcanoes National Park. Māmane is an endemic nitrogen fixing tree that is important in subalpine regions in part because it is the sole food source for the Palila (Loxioides bailleui), a critically endangered Hawaiian honey creeper. You can see some of the bright orange seeds that were exposed from the seedbank in the background, and charcoal in the foreground.

Unplanned, we ended up with 8:1 female to male ratio one day while collaborating on post-fire restoration in Hawai’i Volcanoes National Park! Women in the field that day were from US Geological Survey (USGS), National Park Service (NPS), University of Hawai’i at Mānoa, and Michigan State University. We spent the day scattering seeds in experimental plots to increase the diversity of native species after the Keauhou Fire, and to test whether higher densities of seed will help to create resilience to exotic grasses.

Finishing up planting ‘ihi makole (Portulaca sclerocarpa) — an imperiled, endemic member of the purslane family — in Hawai’i Volcanoes National Park. This project, also a collaboration between US Geological Survey and NPS Resources Management, is examining ‘ihi makole survivorship in different habitats. We hope to create a habitat suitability model that can be used to think about restoration in the face of climate change. Check out the geothermal steam in the background!

‘Oha wai (Clermontia lindseyana), an endemic lobeliad, flowering in the Kahuku Unit of Hawai’i Volcanoes National Park. This individual was planted in experimental plots that were established by NPS to look at how excluding exotic feral ungulates like pigs and sheep affected restoration. Previously, it was thought this species only grew epiphytically in the trees, but it turns out that ‘oha wai grows just fine in the soil surface if pigs are not around.

Some field sites are more remote than others, and supplies (including native plants!) are transported via helicopters. Plants and supplies in this sling load are headed to Nakula Natural Area Reserve, at about 2500m elevation on the south side of Haleakalā. This site consists of previously grazed pasture lands that are being restored in the hopes of releasing endangered Kiwikui (Maui Parrotbill) to expand their available habitat. The USGS portion of the project is in collaboration with Maui Forest Bird Recovery Program and UH Mānoa and explores how forests act to capture fog water in this otherwise arid habitat. 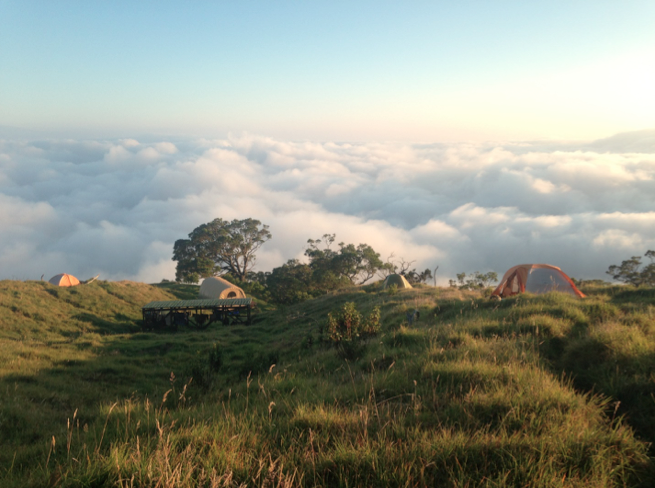 Camp at Nakula Natural Area Reserve above the clouds, until those clouds move higher in elevation through the day and lead to precipitation in the form of fog. Based on current rainfall models, this area should be a dry forest, but due to the almost daily fog these soils are rarely dry, leading to higher than expected survival of planted native forest species.

Experiments in Hakalau Forest National Wildlife Refuge exploring thresholds to restoration – how many seed are needed to see native understory species recruitment in exotic grasses? How little grass must there be before recruitment takes place? Hakalau Forest is managed by US Fish and Wildlife, and is attempting to restore forest habitat for endangered Hawaiian birds at elevations high enough to stay ahead of avian malaria moving upslope with climate change.

To obtain data from our intricate seeding and weeding experiments, we tracked the fate of individual native woody seedlings over time by marking each with a labeled cocktail sword. These are seedlings of pilo (Coprosma rhynocarpa), which are endemic members of the Rubiaceae family and often thought to be early successional in Hawaiian mesic forests. In collaboration with researchers from Stanford University, we will use data collected to build demographic models that explore forest dynamics under different management scenarios.

View more photo collections in the fieldwork section of the blog.