The annual meeting of the Ecological Society of America took place a bit over a week ago (Aug 8-14th 2015) in the city of Baltimore, MD. The centennial of largest national ecological society in the world was no joke, and I can’t imagine how much work must have gone behind the scenes for the impeccable conference ESA pulled off, as usual, but this time with over 4,000 delegates. Once again, I initially approached this conference with a “less is more” philosophy… which I rather quickly had to trash as I started browsing online in the ESA conference personal scheduler app, realizing I wish I could produce ramets and send them to different co-occurring talks. This is what my week ended up looking like… pretty sure I wasn’t the only one, based on how many people I saw running from one room to another along that long corridor.

Fig. 1. A typical (?) ESA schedule: trying to be in four different places at the same time

Indeed, this ESA was packed with plenty of exciting stuff… and the readers of the blog of Journal of Ecology must forgive me for devoting this paragraph to the unexpected partial overlap with another conference: BronyCon. I had just landed in Baltimore, and my jetlag and I were faced with adults and teenagers alike dressed as “My Little Pony” and other fun-looking costumes checking into hotels and taking over the downtown. *I am but left with the question: what do bronies talk about in their meetings? Do they give talks like we do? Are the effects of “My Little Pony” herbivory on prairies a concern to them? Perhaps stamping and fertilization on grassland community composition and diversity? Or the efficiency behind the physiology of flying vs. trotting? Have they implemented a lightening talk format like ESA has (I gave one this year and it was fun)? The only thing I was able to discover (yep, I snuck into their side of the convention center for a coffee from that kilometric queue) was that some of them play Street Fighter-like “My Little Pony”videogames. Interesting, to say the least.

*You are encouraged to read the rest of this paragraph with the narrating voice of Sir David Attenborough in your mind.

The opening of the ESA was particularly motivating, as the invited speakers and accomplished awardees did an excellent job at narrating the history of 100 years of progress of American (and international) ecology. It is clear to anybody in ecology that we are finally moving from descriptive to predictive, and that part of that has been facilitated by classical theories, advanced stats, and the “R revolution” (below). A big surprise during the opening was Obama’s video congratulating the Society.

The annual meeting came with a large number of great symposia and organized oral sessions, and population ecology was every where. I particularly enjoyed the lightening talk symposium on “Advances, Frontiers, Applications, and Challenges within and Across Ecological Disciplines: A Celebration of ESA’s Centennial, and a Roadmap for the Next 100 Years”. Deborah Goldberg, recently honored as Eminent Ecologist virtual issue in Journal of Ecology, gave a killer talk on the past, present and some suggestions for future directions for community ecology… all of that in 5 minutes and on auto-advanced slides!

The conference was full of events I wasn’t able to attend, and I must highlight very especially the workshops put together by Naupaka Zimmerman and collaborators on R for intro-users, R for community ecology analyses, and R for scientific plotting. The reason I couldn’t attend those is that my colleagues and I were busy running two workshops on comparative demography with the recently launched new version of COMPADRE, and another on integral projection models. There seems to be quite a bit of interest in demography at large and population ecology in specific at ESA, as showcased by two organized oral sessions. One of them, co-organized by Norma Fowler, Tom Miller, Eelke Jongejans and myself, now offers the scripts used to develop the science behind the talks fully open access. Our hope is that the usage of this tool in novel ways to address a wide repertoire of ecological and evolutionary questions will trigger other potential users’ imagination to use it even in more creative ways. 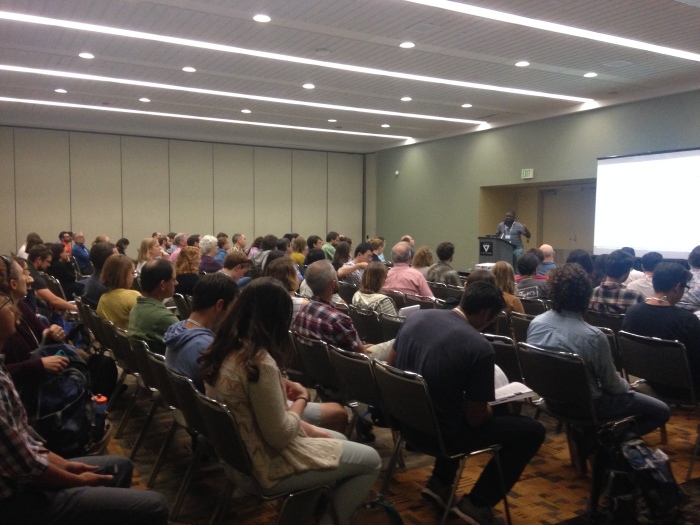 The symposium on “A century of structured population models in ecology” organized by Hal Caswell and Andre de Roos was a must-attend and it was packed. This event contained some very interesting new ramifications of structured population models for microbes, dispersal, individual heterogeneity, sex-ratio evolution and infectious diseases, to mention a few, given mostly by early career researchers (e.g., Kristen Hunter-Cervera, Will Petry, Jess Metcalf, Allison Shaw).

Other events I highly enjoyed included an organized poster session on “Drones for Ecology: New Sampling Tools for Personal Remote Sensing of Ecosystems”, the symposium “Scaling in Ecology: Building a Synthetic and Predictive Science for the Next 100 Years” organized by Brian Enquist et al., and several presentations by other early career ecologists on “Modeling stochastic within-host pathogen growth to predict host growth and life history tradeoffs” by Arietta Fleming-Davies, “Linking nutritional condition to population performance in a shifting climate: Approaching the holy grail” by Thomas Stephenson, and “Low-assumption fitting of interaction kernels: Spline models for neighborhood competition” by Collin Edwards. The latter constitutes what I think is a breakthrough in the way we incorporate inter- and intra-specific relationships in population models; it seems a rather computational demanding approach, based on splines and IPMs, but I can’t wait to read the publication once it comes out (I hope that the authors send it to Journal of Ecology!).

Final thought: I am not sure if this is now an ESA conference official policy, but in a series of organized oral sessions and symposia, the presider reminded the attendees that we should assume that the presenters would prefer not to have their presentations photographed or tweeted –unless otherwise stated by the speaker– and to act consequently by not taking photos or using Twitter… in my humble opinion**, this is a (huge) step backwards, and a rather anachronistic one, if we consider the recent foundation of the Open Science Section of the ESA. Just as with the principle of presumption of innocent, I humbly suggest that open-access should be the default assumption, unless the author explicitly asks not to take photos/tweet about the presentation. An opt-out option could be made available in the online abstract submission, or perhaps a symbol could be created to append to the talks so it is visually obvious to the attendees when not to photograph/tweet about the talk. After all, in most cases, why else would one present one’s research at the largest national ecological conference like ESA, but to get the word out?

**This is my very own opinion, and in no way it represents necessarily the views of the BES or Journal of Ecology.

Fig. 4. Some tweets on the no-photo/no-tweet controversy at ESA.

Next year, the ESA takes place in Fort Lauderdale. I’m already looking forward to the trip to Florida and to keep on engaging with such a vibrant community of ecologists around the world! Hopefully no announcements will be necessary on photos/twiter. Too bad that BronyCon will not take place there… will we at least get a One Direction concert too?!

Associate Editor of Journal of Ecology

One thought on “Some ESA 2015 afterthoughts on Population Ecology, Twitter and BronyCon”