This past week the determination and tenacity of 1500 or so ecologists was tested as they travelled to Ghent, Belgium, to attend the Ecology Across Borders 2017 winter Annual Meeting, organized and hosted by the British Ecological Society, Ecological Society of Germany, Austria, and Switzerland, the Netherland-Flanders Ecological Society, and the European Ecological Federation.

I was fortunate to travel just a few hours early enough to get in ahead of the snowstorm that caused chaos closing Heathrow and Brussels airports stranding ecologists all over the map. Tales of travel interruptus dominated the social media #EAB2017. At Journal of Ecology, several of our Editors were delayed – Senior Editor Amy Austin’s flight from Frankfurt was cancelled, a subsequent train turned around, again stranding her, Associate Editor Roberto Salguero-Gomez had to spend a night in a Heathrow Airport hotel before eventually traveling on via coach, and Marina Semchenko spent an unplanned and cold night in an unheated house in Cambridge after initially setting out from Manchester. Those of us lucky enough to reach Ghent on time struggled through blizzard-like conditions to reach the Convention Center on Monday, the first day of the meeting.

Notwithstanding the snow, I spent the first day attending an R Hackathon workshop in which our group opted to develop a new R package ‘traitfindr’ that could be used to interrogate trait databases. This workshop was a great success even though, perhaps not surprisingly, our group did not actually finish our package during the time we had. Undeterred, all groups left with plans to complete their work. I was pleased to interact and meet other ecologists that know far more about R coding than I ever will.

When the meeting started properly on the Tuesday, there were many on-the-fly schedule changes and near misses as delegates struggled into town. Amy Austin arrived in time to give her presentation on the challenges for women in science saving incoming BES President Richard Bardgett the awkward problem of giving her presentation. BES President Sue Hartley gave a brilliant opening plenary talk on silica in plants two days early as the scheduled speaker had not yet made it in (random thought – Sue actually had her talk ready two days early?).

As usual, attending the presentations and poster sessions was inspiring and informative. In between journal editor meetings, I focused my attention mainly on talks related to functional traits including a fascinating session on “Using species traits to understand the structure and function of interaction networks” which emphasised both theory (Dominique Gravel) and data (several presentations) involving plants and organisms in several functional and trophic levels.

Quantification of interaction metawebs by Darren Giling offered fascinating insight into the role of species in communities. I reaffirmed the value of my habit of dropping into sessions at random. Unable to find the room of a session I thought I was interested in, I just went into the auditorium and subsequently enjoyed the session on remote sensing that I’d stumbled into. For example, Anna Schweiger’s presentation on “Leaf level spectra, spectral diversity and ecosystem function: can we scale up to the landscape level” was one of the best I saw offering a fascinating account of how leaf spectral measurements can be used as proxies to determine functional and phylogenetic ecosystem parameters.

For Journal of Ecology the meeting was busy, important and successful. The four Senior Editors got together face-to-face in the same room for the first time in years (Skype and phone calls don’t really cut the mustard in my mind). We tried to have dinner together on Sunday night, but as noted above Amy was delayed by snow in Frankfurt. In addition, we hosted a business meeting for our Associate Editors that included several of our new board members – welcome Iain Stott, Paul Kardol, Crystal McMichael, Cristina Garcia and Eric Allan!

Furthermore, AE Jane Catford and I joined Methods in Ecology and Evolution Senior Editor Bob O’Hara in a “What Makes a Good Reviewer” workshop, Mark Rees and I tried our hand at Speed Reviewing with prospective authors, Senior Editor Amy Austin was recognized for her L’Oréal-UNESCO For Women in Science Award and spoke at the Women in Science workshop, Martina Treurnicht was awarded (in absentia) the 2016 Harper Prize for her paper (Environmental drivers of demographic variation across the global geographical range of 26 plant species), and Senior Editor Richard Bardgett was sworn in as the new BES President. We all spread the word to delegates about our current Open Call for Special Feature proposals. 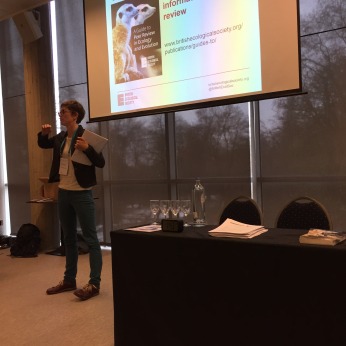 AE Jane Catford on how to be a good reviewer

As usual, I left the meeting feeling dazed but inspired following the intensity of the meetings. I even met Fiona Seaton and Lisanne Van Willegen, post-graduate students working at my alma mater, Bangor University; Lisanne is working at my old field site of Newborough Warren, Anglesey (memories of field work flooding back). Ghent was a great place to be and the BES pulled off another great Winter Annual meeting, and even threw in some snow to authenticate the experience! 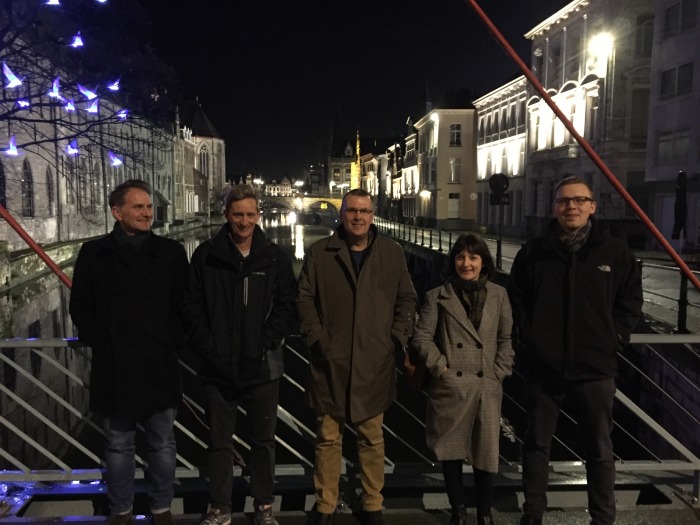