Journal of Ecology is pleased to announce that the Editor’s Choice paper for issue 101:5 is “Scale-dependent relationships between tree species richness and ecosystem function in forests” by Chisholm et al.

The argument for biodiversity conservation is increasingly being framed in terms of maintaining ecosystem functions and services. However, just how important a role biodiversity plays in guaranteeing the provisioning of these services remains contentious. Experimental and field-based studies that have explored the relationship between biodiversity and ecosystem functioning have often reached contradictory conclusions. This issue’s Editor’s Choice, “Scale-dependent relationships between tree species richness and ecosystem function in forests” by Ryan Chisholm and co-authors makes progress in reconciling these seemingly contrasting results. As it turns out, spatial scale is critical.

The conceptual basis of the study is as follows.  At small spatial scales any environmental effects are likely to be drowned by other effects arising from stochastic variation in diversity, such as sampling effects and niche complementarity. All things being equal, diverse patches are therefore expected to have higher ecosystem function than species-poor ones at small scales (i.e. those at which most experiments are conducted). At larger spatial scales, there is less stochastic variation in diversity among quadrats and so what is left is the environmental effect. Under these circumstances diversity is expected to play a much smaller role in shaping ecosystem process compared to the environment: this may explain why observational studies have traditionally considered productivity to be the driver of diversity patterns, and not the other way around. 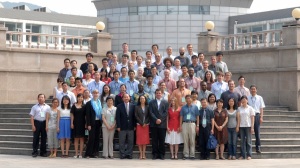 To put these ideas to the test, Chisholm and his co-authors take advantage of a globally distributed network of permanent forest plots (http://www.sigeo.si.edu). Relying on this unique dataset, they explore how two key ecosystem services provided by forest – the capacity to sequester and store carbon – relate to tree species richness, and ask how spatial scale affects this relationship. At a grid size of 0.04 ha, diverse stands generally sequestered more carbon into woody stems and stored greater volumes of live biomass per unit area than species-poor ones. However, when the spatial grain was increased to 0.25 ha, and then further still to 1 ha, differences among diverse and species poor communities faded. Although small patches of diverse forest pack a greater density of stems and utilize available resources with greater efficiency, environmental heterogeneity is what ultimately determines the carbon dynamics of forest landscapes.

Recent studies have suggested that the effects of biodiversity loss on the ability of ecosystems to function and provide services will be comparable in magnitude to those of other drivers of global change. The work by Chisholm and his co-authors points to a more complex scenario, one in which ecosystem responses to global change are scale dependent