How do mixing effects change depending on the species composition of a forest stand? And is it true that trees are more likely to positively complement each other when environmental conditions are harsher? In a new Journal of Ecology study, scientists from the Swiss Federal Institute for Forest, Snow and Landscape Research (WSL) used data from thousands of forest plots to investigate these aspects.

Mixed-species forests are known for their potentially higher levels of ecosystem services and functions than monocultures. They are also likely to be more resistant and resilient to climate change stressors and ecological disturbances.

Several studies have shown that forests composed of many tree species can be more productive than monocultures. However, others have demonstrated that complementarity effects for any given tree species are hardly generalizable because they can vary greatly along gradients of climatic conditions and resource availability. For example, under certain conditions species A might benefit from the presence of species B, but at increasing temperature or precipitation, a positive complementarity effect may become negative. 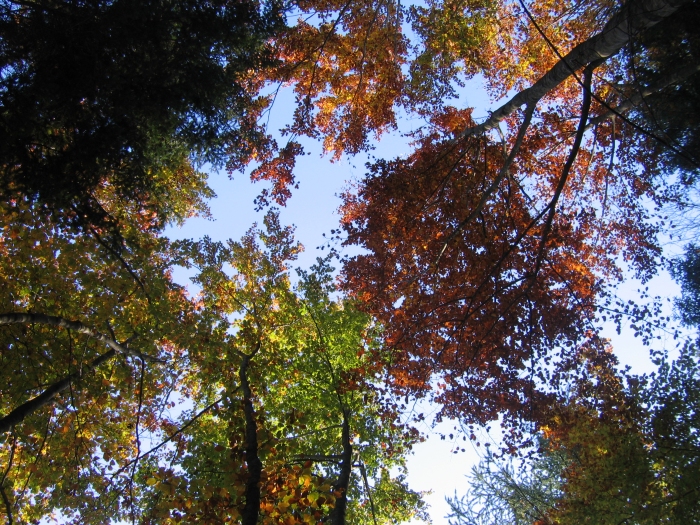 Complementarity effects can increase or decrease with competition for above-ground resources depending on the combination of shade tolerances of the species in a mixture. (Photo: Marco Mina)

So far, studies on mixing effects have mostly focused on specific mixture types (e.g., beech-pine, pine-oak or spruce-fir) and there have not been large-scale investigations on multiple two- and three-species mixtures along environmental gradients. For this reason, myself and other scientists from WSL took advantage of the entire Swiss National Forest Inventory (NFI).

We assessed complementarity patterns on individual-tree growth for the major central European tree species growing in 19 mixture types. The examination of multiple mixtures at the level of species identity allowed the us to evaluate whether patterns of complementarity for a given species change depending on the composition of the stand.

The field team of the Swiss NFI collects individual-tree measurements and stand characteristics from a sample plot. The Swiss NFI is based on terrestrial sampling on a 1.4×1.4 km grid of permanent plots covering the entire country. To date, a total of three surveys have been completed since NFI1 (1983-85). The fourth inventory began in 2009 as a continuous survey and will be completed by the end of 2017. (Photo: Simon Speich)

In the study, we used data from all four inventory campaigns and non-linear mixed effect models to assess tree growth of Norway spruce, silver fir, European larch, Scots and mountain pine, European beech, Sycamore maple and common ash, and how this is influenced by growing in different mixed stands. To evaluate how complementarity effects vary with site and stand conditions, we fitted and analysed interactions between site-dependent variables (e.g., stand density, stand development, temperature, moisture, soil pH) and the effect of mixing.

Generally, complementarity was found to increase with increasing drought conditions. This was observed for spruce, beech, maple and ash growing in different mixtures but there were some exceptions. These results indicate that some (but not all) mixed-species forests can reduce water stress and that complementarity effects related to drought conditions should be investigated considering the species identity rather than using indices of species diversity.

Under changing temperatures, complementarity patterns revealed a different trend; in some cases species positively complemented each other more with increasing temperature but in others the pattern was opposite. Other site-dependent factors such as soil acidity, nitrogen deposition, topographic features were also found responsible for changes in complementarity for many of the species. This adds complexity to the study of mixing effects, making it even harder to draw general conclusions regarding species A growing in conjunction with species B and/or C.

The magnitude of complementarity increased or decreased with increasing above-ground competition, stand density and stand development. Therefore, a general trend across mixture types could not be identified for these variables.

Showing that complementarity effects are not only contingent to climate but to stand characteristics is crucial in the context of adapting forest management to climate change because competition, stand development or density are properties can be directly modified through silvicultural interventions.

This study showed that it is possible to identify the conditions under which the promotion of mixed-species forests can also help in fostering forest productivity. Enhancing species diversity has been increasingly proposed as a strategic approach for managing and conserving forests in an uncertain future. However, this would require careful assessments at the level of species identity under changing resource availability as well as under different levels of stand density and development.

The authors of the paper are Marco Mina, Markus Huber, David Forrester, Esther Thürig and Brigitte Rohner of the Swiss Federal Institute for Forest, Snow and Landscape Research.