The Editor’s Choice paper for the final issue of 2018 is titled Manipulating two olfactory cues causes a biological control beetle to shift to non-target plant species by Li et al. Professor Stephen Bonser, who handled the paper as an Associate Editor, gives some thoughts on the paper…

Phytophagous insects are potentially useful biocontrol agents. Insect specialisation on a single host species is an important condition of the use of insects in biocontrol. Host shifts to non-target species is undesirable in a biocontrol treatment.

Here in Australia, the unintended ecological impacts following the introduction of the cane toad as a biocontrol agent have been profound. More generally, we know that host shifts in specialised insect herbivores do occur, as host shifts drive the diversity of phytophagous insect taxa (e.g. Farrell, 1998). Surprisingly, we remain uncertain about how many biocontrol insects detect their host plants.

In this issue’s editors’ choice article, Li et al. perform an elegant series of studies demonstrating the olfactory mechanism of host plant selection of the flea beetle (Agasicles hygrophila) on the invasive host plant alligator weed (Alternathera philoxeroides). The authors examined volatile chemicals produced from alligator weed, and other non-host species, including closely related species and species with the same growth forms.  They then examined how beetles responded to different combinations of volatile chemicals.

In their study, Li et al. used a series of field preference experiments, olfactory preference assays, and volatile addition preference trials to establish how A. hygrophila individuals locate their host plants.  They extracted chemicals from each of 13 experimental plant species (including the host plant Alternathera philoxeroides) for their olfactory assays and volatile addition experiments.  This approach allowed the authors to demonstrate how A. hygrophila beetles select host plants, and the conditions underlying host shifts to other species. 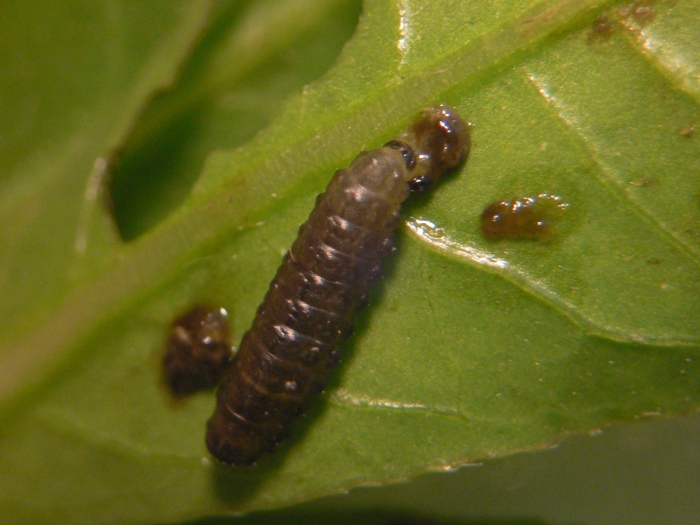 The larval flea beetle on the host plant

Importantly, these two chemicals are common across plant species.  The ratio of DMNT and (Z)-3-hexenol in A. sessilis is similar to that of the preferred host A. philoxeroides, and beetles often selected this non-host species for feeding and oviposition.  Indeed, A. hygrophila beetles have been observed in wild A. sessilis populations.  Host shifts in specialist insect herbivores may be common in instances where biocontrol agents select hosts on the presence and/or absence of common volatile chemicals.  Perhaps the reduced fitness of individuals on new hosts limits the success of these host-shifted populations. However, adapting to these new hosts does not seem to be an insurmountable challenge as rapid evolution to new environmental stresses is common across animal and plant taxa.

This study has important implications for the use of insects as biocontrol agents.  Host detection by common volatiles (those that are likely to also occur in some non-target species), and rapid adaptation of insects on new hosts sets the stage for unwanted and potentially problematic hosts shifts. These are potentially fertile areas for future research.