Michał Bogdziewicz, Nathanael Lichti and Rafał Zwolak recently had their paper about predation and invasions accepted in the journal. You could read more about their paper in the blog post below.

Plants throughout the world are dispersed by scatterhoarding animals, including jays, squirrels and chipmunks, wood mice, the neotropical agoutis and agouchies, and kangaroo rats and mice. These animals carry seeds away from parent plants and then bury them for future use, but often bury more seeds than they eat. Because dispersal and burial by scatterhoarders can often increase seed survival and germination, scatterhoarders can function as mutualistic plant dispersers. However, if undispersed seeds fare well by themselves, or if hoarders eat too many seeds, then they function as seed predators. 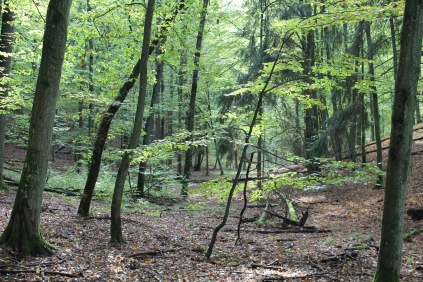 The interactions between plants and scatterhoarders depend in part on choices that the hoarders make about which seeds to harvest, store, and eat, and these choices can change depending on the environmental context of the interaction. In particular, if two species of seeds are available, hoarders may prefer to eat one of them and save the other for later. Consequently, predation on the first seed species can fuel mutualistic, long-term storage of the second species. Theoretically, this can result in an indirect seed-seed interaction that has been called “apparent predation” because its demographic effects resemble those of a direct, pairwise predatory interaction. 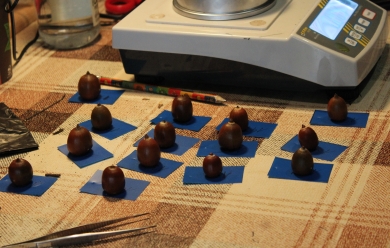 To our surprise, the survival of native, sessile oak acorns in our field trials was higher in presence of red oak than when sessile oak was presented alone. Furthermore, the presence of native acorns suppressed seed survival in the invader. Thus, although we found apparent predation in this system, the direction of the interaction was opposite to our expectations.

Our simulations examined how this phenomenon might interact with landscape-scale changes in species composition to alter propagule pressure over the course of a successful invasion. Early on – when most red oaks co-occur with sessile oaks – most mice would experience a mixed resource base and apparent predation would reduce red oak propagule pressure, slowing the invasion. However, this effect diminishes as the invasion progresses and more mice occupy neighborhoods dominated by red oak. As a result, our model predicts that per capita seedling recruitment by the invader will increase asymptotically as it becomes more prominent on the landscape. On the other hand, per capita recruitment by sessile oak acorns is also predicted to increase.

These results offer a new twist on the old idea of “biotic resistance”, or the innate ability of communities to thwart invasions of alien species. Our study demonstrates that this ability can result from apparent predation of native plants on invasive ones. However, strength of this interaction is predicted to gradually vanish as native plants are displaced from communities.

Read the full paper online: Consumer-mediated indirect interaction with a native plant lowers the fitness of an invasive competitor

One thought on “Apparent predation and plant invasions”