She is particularly interested in how plants and soil microbial communities interact under these changing circumstances, and how this influences ecosystem processes like nutrient and carbon cycling. Some past and current research topics are the retention of nitrogen in terrestrial ecosystems; indirect, plant-mediated, climate change effects on soil organisms and their functioning; fundamental controls on the stability of soil communities and their functioning; and incorporating this knowledge into sustainable farming systems.

What has inspired me to pursue a career in ecology?

As many who wrote about their ecological inspirations here before me, I have always been interested in nature and my major motivation to study environmental sciences at university was that I wanted to save the world. But for me, the two things that have made me pursue an academic career in ecology are an intrinsic desire to understand how soil ecosystems work, and the people that came along during this quest.

At the risk of sounding self-centred, rather than other people’s work, the single most important thing that has made me continue in ecology has been my own experimental results. I almost chose a Master’s project on goat grazing in Spanish olive groves, which would have started a very different academic journey. However, because I eventually decided on a Master’s project on the role of nematodes in soil nitrogen cycling, everything else has been a succession of that work: from nematodes, to the role of fungi and bacteria in nitrogen cycling in agricultural grasslands, to the role of soil food webs in carbon and nitrogen cycling in agricultural systems, to the role of plant-microbial interactions in nitrogen cycling in semi-natural grasslands, to the fundamental controls of ecosystem nitrogen retention, to the impacts of climate change on soil microbial communities and their functioning. When I’d finish an experiment, there were always so many new questions that came up that I just had no option but to continue.

The other thing that has inspired me to continue in ecology is the people that I met along the way. I first got interested in soil ecology because of two inspirational lecturers: Ron de Goede and Lijbert Brussaard. They were the supervisors of my first experiment; the one that looked at nematodes. I also did my PhD, which focussed on the role of soil fungi and bacteria in nitrogen cycling, in their department. At that time, I enjoyed doing research, but it still felt a bit like being an undergraduate student – I did what I had to do, I did it well, but I wasn’t too excited about it. However, this all changed when I attended the PhD course Soil Ecology in Wageningen in 2006. There, I spent a week with the best and most well-known soil ecologists – the big names on the big papers that I had been reading. Among others, Diana Wall was there, Heikki Setälä, Nalini Nadkarni, Nancy Collins Johnson, Wim van der Putten, and what turned out to be my future postdoc supervisor Richard Bardgett. This was truly an inspirational week, during which something clicked – I then knew I wanted to stay in academia and continue in ecology. And some of the people I met there have continued to be my informal mentors, reassuring me when I was anxious that I didn’t publish enough, guiding me as my responsibilities grew, and providing references for my job applications. But also, my fellow students at this course are now my peers, and it is just wonderful to see that they have also landed faculty jobs, and to be able to collaborate with them in our own right! 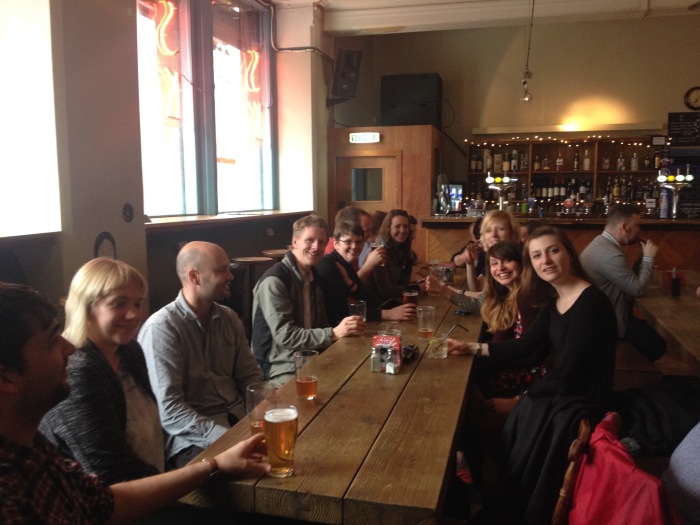 Science is best done in the pub with friends. BES-funded sequencing meta-analysis workshop 2015 in Manchester.

Having said that though, if I had to name a paper that has inspired me in my research, it would be the 2004 Science paper that was actually written by many of the people that I met at the Soil Ecology course: Ecological linkages between aboveground and belowground biota, by David Wardle, Richard Bardgett, John Klironomos, Heikki Setälä, Wim van der Putten, and Diana Wall. This landmark paper proposes a conceptual framework for linking aboveground and belowground organisms, and is central to the ever-growing field of aboveground-belowground interactions. It also has a great conceptual figure in it that I still use in my presentations!

The people who I work with are still, and will always be, a source of joy and inspiration. I am not one of those people who like to talk about work all the time, but with my best colleagues, conversations dip in and out of science, personal issues, small talk, and banter, and often the best ideas come up during informal discussions. Some of my colleagues have become close friends, and on a bad day good colleagues are more valuable than anything. I am extremely grateful for all the wonderful people that have supported me so far in my career and I am trying my best to support and mentor young ecologists in their journey, too – whether the end point is academia or not. Having a support network is increasingly important with funding and jobs becoming ever more competitive. We can all do better to foster a culture of inclusivity and positivity, and this is why initiatives like 500 Women Scientists and 500 Queer Scientists, to name a few, are so important.