Brandie Quarles (Duke University) gives some background on her recent paper on ageing in plants.

Ageing, or senescence, is defined as a decline in function and an increased risk of mortality with increasing age. When many people hear the word aging, they likely think about it in the context of humans or other animals. I’ve found that it’s pretty common for people to assume that plants don’t age, especially because of the many long-lived trees we are all surrounded by. In fact, some early plant aging researchers expected that perennial plants would show slow, or even no demographic ageing due to their constant turnover of leaves and indeterminate growth (Vaupel et al. 2004).

One clue that plants might show age-declines came from a longitudinal study with Plantago lanceolata (ribwort plantain, which is an herbaceous perennial rosette species found world wide) where, during a period of environmental stress, older individuals died at a higher rate (Roach et al. 2009). This suggested that maybe P. lanceolata was displaying condition-dependent ageing and to test this new hypothesis we wanted to know: 1) Is it only during certain conditions that we see a difference in mortality between young and old individuals? 2) What are the traits that contribute to that mortality difference? 3) Do all performance-related traits decline together?

Our field site, Morven Farms, in Charlottesville, Va. A natural population of P. lanceolata exists at this site that was a cattle field several decades prior to being maintained as a mown field for the last 30 years.

To answer these questions, we established a field experiment with young (1 yr.) and old (6 yr.) plants that had previously been growing in the greenhouse. The high age-dependent mortality in the Roach et al. 2009 study coincided with a period of high precipitation; thus, we hypothesized that these conditions may have increased growth of P. lanceolata competitors. To test whether competition influences age-dependent trait expression, we manipulated competition in the field by removing above-ground competition from around half of the experimental individuals and leaving the naturally growing competitors around the rest of the individuals. We were also interested in seeing if age-dependent trait expression was affected by the seasonal fluctuations in weather conditions that may cause stress. To identify traits that showed age-dependent expression, and to investigate whether declines with age are coordinated across traits, we took an integrative approach and measured a wide span of growth, physiological, and reproductive traits.

Two P. lanceolata experimental individuals, one without competition and one with competition.

We found consistent age differences in plant size, mortality, and seed size. Older plants were smaller, more likely to die, and produced smaller seeds. In addition, we saw age-by-competition and age-by-season interactions. For example, older plants died more under competition and during certain seasons. Interestingly, older plants only showed lower physiological function during the winter months when their chlorophyll content was lower in January and photosystem II efficiency was lower in December than young plants. 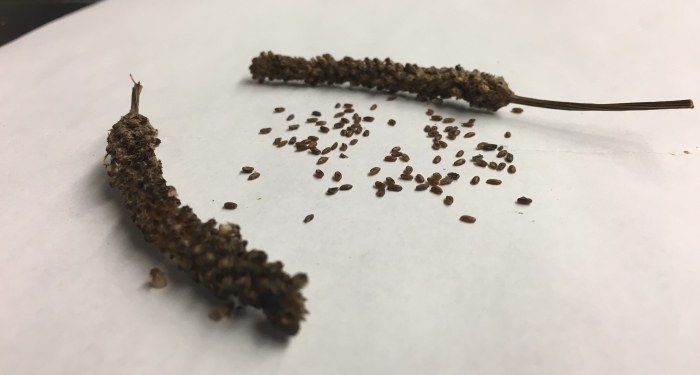 More broadly, these results suggest that ageing in plants is a complex phenotype where declines in traits are uncoordinated and can be, but are not always, sensitive to environmental conditions. The smaller seeds produced by older plants may be indicative of an age-dependent maternal effect that might have key impacts on an individual’s fitness and on population demography. It is important to remember; however, that not all plant species show age-related deterioration (Morales et al. 2013). It is thus clear that more integrative longitudinal studies of age-dependent trait expression are needed to better understand the universal nature of ageing among species.

Read the full paper online: Ageing in an herbaceous plant: Increases in mortality and decreases in physiology and seed mass