The next issue of Journal of Ecology will be published online soon. We are really pleased to announce that the Editor’s Choice article from issue 101:3 is “Specialist species of wood-inhabiting fungi struggle while generalists thrive in fragmented boreal forests” by Nordén et al. Read a commentary on the paper below, written by Journal of Ecology Associate Editor Peter Thrall.

Ecologists and evolutionary biologists have long recognised the importance of spatial structure. For example, the metapopulation concept (Levins 1969), which has stimulated an extensive body of work over several decades (e.g. Hanski & Gilpin 1997), explicitly recognises the importance of considering population connectivity at a landscape scale, as well as the role of life history (e.g. dispersal) in determining local and regional dynamics. Studies framed in this context have contributed to a broad range of insights regarding the role of spatio-temporal heterogeneity in species and community persistence, host-pathogen and predator-prey systems, population genetics and coevolutionary outcomes.

Our terrestrial landscapes and the ecosystems embedded within them are changing at an ever-increasing rate, due to demographic pressure, food security concerns, shifting patterns of land-use, climate predictability and global connectivity. Clearly, one major consequence of these trends is the continued fragmentation of natural habitats and the potential to impact on species persistence and community structure. While there have been many analyses of the impact of fragmentation on patterns of diversity, genetic structure and ecosystem services (e.g. pollination), fungi represent one group of organisms that have been notably absent from such studies.

This is an important knowledge gap – while fungi are not always conspicuous, they are ecologically important components of most, if not all terrestrial ecosystems. For example, the highly diverse group of wood inhabiting fungi play major roles in critical decomposition processes yet these organisms may be particularly vulnerable to fragmentation (Odor et al. 2006), as despite having generally high dispersal ability, they tend to have specific localised resource requirements (i.e. dead trees).

This issue’s Editor’s Choice, “Specialist species of wood-inhabiting fungi struggle while generalists thrive in fragmented boreal forests” highlights the work of Jenni Nordén and co-authors who have accumulated an extensive multi-year dataset on the occurrence of more than 100 wood-inhabiting fungi across nearly 500 sites in Fennoscandia, primarily dominated by coniferous trees.  Over 5 years they sampled nearly 100,000 trees (or “resource units”) for the presence/absence of a diverse group of fungi. A major aim of this work has been to identify ecological factors (forest age, tree species, resource abundance and quality) and fungal characteristics associated with risk of extinction in the context of forest fragmentation. 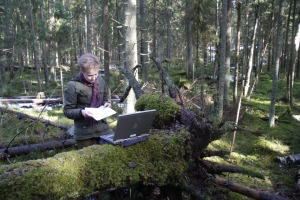 Using a hierarchical modelling approach, Nordén and colleagues show that IUCN red-listed species of fungi require well-connected natural forests at multiple spatial scales ranging from landscapes to individual forest stands. These species also have more specialised resource requirements than generalist species, which appear to do quite well even in highly fragmented situations, and in fact prefer open forests. Interestingly, specialised species have smaller spores than generalists, which may relate to their greater dependence on dispersal to appropriate environments. Of note was the finding that the diversity of specialists could be an order of magnitude greater in well-connected relative to fragmented sites.

From a conservation perspective, this study provides a valuable picture of anthropogenic impacts on an ecologically important and diverse group of organisms that are frequently neglected in such studies. The results strongly support the need for protection of existing forests as well as strategic revegetation, and in conjunction with earlier work from this group (Berglund et al. 2011) highlight some of the factors that determine fungal vulnerability to extinction.

Levins, R. (1969) Some demographic and genetic consequences of environmental heterogeneity for biological controlBulletin of the of the Entomology Society of America, 71, 237–240.