We are pleased to announce that the Editor’s Choice paper from the next issue of Journal of Ecology is “Recolonizing wolves trigger a trophic cascade in Wisconsin (USA)” by Callan et al.  Read the commentary below written by Journal of Ecology Associate Editor Charles Canham.

While loss of top predators is a concern in ecosystems worldwide, the upper Great Lakes region of the US – the northern portions of the states of Michigan, Wisconsin, and Minnesota – has seen a strong recovery of grey wolf (Canis lupus) populations over the past 30 years.  This issue’s Editor’s Choice, “Recolonizing wolves trigger a trophic cascade in Wisconsin (USA)” by Ramana Callan and co-authors takes advantage of spatial variation in the distribution of recovering grey wolf populations to test basic questions about the cascading effects of predators on plant species abundance and diversity. 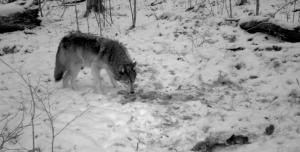 The study takes advantage of the existence of over 30 years of data on wolf pack distribution in northern Wisconsin – data collected by state wildlife biologists working to document recovery of the population under the US Endangered Species Act.   Those data allowed the authors to design a simple but compelling sampling scheme to test whether the consistent presence of wolves in recent years is associated with greater diversity and/or abundance of plant growth forms that are particularly sensitive to browsing by white-tailed deer (Odocoileus virginianus), the dominant herbivore in the system and an important prey for the grey wolf.  The authors used species area curves – again a simple but effective tool – to address the question of the spatial scale at which evidence emerged for trophic cascades.   The study finds clear evidence that presence of wolves is associated with higher species richness of growth forms (primarily forbs) that are most sensitive to browsing by deer, and that the effects are most pronounced at smaller spatial scales.

It would be hard to imagine that this study could have been done without access to the long-term data on wolf pack distribution collected by state officials.  Ecologists are becoming more and more adept at the use of routine data collected by resource managers, whether for inventory purposes or as measures of regulatory compliance.  The questions addressed by Callan and her co-authors are not novel in and of themselves – ecologists have long known that current densities of white-tailed deer are high compared to levels prior to European settlement, and exclosure studies routinely show that deer have strong impacts on abundance and diversity of understory species.  But prior to this study there has been only very limited empirical evidence that the presence of predators could alter that dynamic.

There is a somewhat melancholy back story to these results:  the best known previous work on trophic cascades in this region comes from the iconic studies of wolves and moose on Isle Royale in Lake Superior.  While grey wolf populations have shown exponential growth rates in mainland portions of the region, the wolf population on Isle Royale is threatened by genetic isolation and inbreeding in the very small resident population.  New wolves have periodically arrived on the island via ice bridges from the mainland, but the frequency of those connections is expected to decline with climate change.  Management agencies now face the question of how (and at what cost) to ensure the viability of such a small population, when the species has recovered so well in surrounding areas.  The work of Callan et al. as well as the pioneering work on Isle Royale provides clear evidence that the absence of the top predators can have pervasive impacts on the native plant communities.