Issue 103:1 of the Journal will be online soon. The latest Editor’s Choice paper is “Earthworm invasion, white-tailed deer and seedling establishment in deciduous forests of north-eastern North America” by Dobson & Blossey. Associate Editor Frank S. Gilliam has written a commentary on the paper below.

The herbaceous layer of eastern hardwood forests: small of stature, large on importance

To those of us who do research on the dynamics of the herbaceous layer in forest ecosystems, the essential role of this lowest of vegetation strata in maintaining the structure and function of those ecosystems is no mystery.  To others, however, it may come as a surprise that, despite that its relative biomass is far less than 0.1% of total standing above-ground biomass of forests; the herb layer serves a function that belies its diminutive stature.  For example, up to 90% of more of the plant biodiversity of forest communities is found in the herb layer.  Furthermore, it can represent 5% of net primary productivity and produce nearly 20% of litterfall, material which tends to have far higher concentrations of N, P, K, and Mg, thus facilitating rapid recycling of macronutrients (Gilliam 2014). 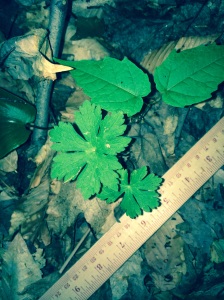 Another characteristic of the herb layer of forests is its sensitivity to a wide variety of endogenous and exogenous disturbances of both natural and anthropogenic origin.  The more intense and extensive of these disturbances, such as forest harvesting or fire, can initiate secondary forest succession, which actually can be mitigated by composition of the herb layer itself, wherein the herb layer serves as a regeneration filter for seedlings of eventual canopy dominant species.  Other disturbances are perhaps more subtle (since they do not directly impact the forest overstorey), yet are no less profound in their effects.  Essentially all of these are of anthropogenic origin.  These can include plant species invasions (Ehrenfeld 2010), earthworm activity (Hale et al. 2006), and browsing by white-tail deer (Waller 2014).  As is virtually always the case involving human activities that interfere with ecosystem function, these effects often occur simultaneously (Whitfeld et al. 2014) .

The forest floor profile from as forest invaded (above) and uninvaded (below) by earthworms (photo credit: Grant Dobson)

The Editor’s Choice in this issue of Journal of Ecology is “Earthworm invasion, white-tailed deer and seedling establishment in deciduous forests of northeastern North America,” by Annise Dobson and Bernd Blossey.  The authors tackle the challenge of simultaneous effects of anthropogenic disturbance head-on by establishing a field experiment that manipulates deer browsing and earthworm activity in a factorial design in the Finger Lakes Region of New York.  Among the compelling aspects of this study is that they used transplants of 15 prominent herb-layer species in the temperate hardwood forests of the region, essentially allowing herb composition to be an additional manipulated variable.  Thus, part of the novel aspect of this study was in combining these variables in an experimental setting in the field.

Enemies above versus enemies below

Although most plant ecologists are aware of the deleterious effect that overbrowsing by burgeoning populations of deer can have on forests (Waller 2014), I suspect that many who might read this are at least somewhat surprised to consider earthworms as agents of disturbance in eastern hardwood forests of the United States.  I recall learning as a child that earthworms serve an important role in ‘tilling’ the soil, simultaneously aerating and fertilizing the soil.  The reality, however, is that they can increase decomposition to the extent that there is minimal humus layers in impacted forests, and can enhance herbivore and pathogen attacks (Hale et al. 2006).  Dobson’s and Blossey’s results suggest that earthworm activity (using the surrogate metric of earthworm biomass) decreased seedling survivorship in virtually all herbaceous species (12 out of 15).  In addition, the negative effects of earthworms exceeded that of deer browsing. Interestingly, there were no interactive effects of deer and earthworms.

Some surprising findings:  other trophic interactions

I found this paper to be intriguing for a variety of reasons. As previously stated, it tackles the challenge of multiple stressors by examining them interactively.  Furthermore, the use of transplants of important herb layer species eliminates confounding that can be unavoidable in field studies, wherein ‘replicate’ sites are often not true replicates of each other because of natural spatial variation in herb composition. I also found quite interesting the novel findings regarding other trophic interactions: earthworms increased likelihood of insect attacks on herbs, whereas deer browsing decreased extent of rodent attacks.