With an estimated >27,000 species, the orchid family is one of the most speciose plant families within the Angiosperms. At the same time, it harbours a large number of threatened species, making it one of the most vulnerable plant families as well. Due to their spectacular floral diversity, orchids have long attracted wide attention from the general public. The commercial trade in specimens was already established in the nineteenth century after the first orchid from overseas had been sent to London in 1818. Eventually, this resulted in a flourishing industry that comprised collectors, merchant traders and orchid hunters who competed against each other, in often dreadful conditions, to find and extract the precious — and much-coveted — flora from their natural habitats. Specimens from all over the world were sent to orchid markets in London and elsewhere in Europe, where they were sold for considerable (and sometimes absurd) amounts of money, culminating in what has later been described as ‘orchidelirium’, the name given to the Victorian era of flower madness, when collecting and discovering orchids became extraordinarily popular. It was not until the 1920s when the French mycologist Noel Bernard discovered how to propagate orchids from seeds that the orchid mania subsided and the plants became plentiful (and affordable!) in Europe and the U.S.

Apart from their ornamental value, orchids have always attracted great scientific interest as well. Inspired by Christian Konrad Sprengel’s 1793 work Das entdeckte Geheimnis der Natur im Bau und in der Befruchtung der Blumen (The Secret of Nature in the Form and Fertilisation of Flowers Discovered), Charles Darwin was among the first to highlight the striking complexity of orchid pollination. In his book ‘On the various contrivances by which British and foreign orchids are fertilized by insects’, which was first published in 1862 and published again, in a revised version, in 1877, Darwin wrote in meticulous detail about the close functional relationships between the sexual structures of orchids and the insects that fertilize them. Although the book sold only about 6,000 copies before the turn of the century and was therefore – at least from a publisher’s point of view – not a success, it was much praised by botanists. Darwin had noted this himself when he wrote: ‘For since the appearance of my book, a surprising number of papers and separate works on the fertilization of all kinds of flowers have appeared; and these are far better done than I could possibly have effected.’ Judging by the large number of papers on orchid biology published in Journal of Ecology, from which the contents of  this Virtual Issue  were selected, orchids continue to be a rich source of inspiration and great model systems for answering important and timely questions in ecology and evolution.

The selected papers cover three major fields highlighting the complexity of the orchid life style: reproductive biology, demography and mycorrhizal associations. Additionally, twelve Biological Flora of the British Isles accounts have been included in this Virtual Issue. These Biological Flora accounts not only provide a thorough review of what is known about the distribution and natural history of each of the species they address, but also offer critical reflections about their ecology and conservation. Although Biological Flora accounts aim to be as complete as possible, reading between the lines often reveals important gaps in knowledge, or suggests hypotheses to be tested in future research. Therefore, these accounts may be most valuable in providing an important source of inspiration.

Orchids have a complex life-history and describing the demography of these species can be challenging, tedious and at times even frustrating. Every field biologist who has spent a couple of weeks of his/her life monitoring orchid populations knows that one of the most challenging parts of describing the orchid life cycle is getting a grip on what you can’t see, i.e. the developments that take place underground. Seed germination and protocorm development are notoriously difficult to estimate under natural field conditions. Moreover, more than in any other plant family, mature adult individuals are also able to stay underground for one or more years, a phenomenon better known as vegetative dormancy. Dormancy not only complicates field work, but also has a big impact on data analyses afterwards. At least four papers in this Virtual Issue deal with dormancy and how to integrate it into demographic models (Kéry and Gregg 2003, 2004, Shefferson and Tali 2007; Shefferson and Simms 2007). To make things even more complex, orchids do not only rely on pollinators for completion of their life cycle; they also depend on mycorrhizal fungi. The study of mycorrhizal fungi has now stepped out of its infancy, and it has become increasingly clear as a result of major recent advances that mycorrhizal fungi have a major impact on the distribution (Diez 2007; Jacquemyn et al. 2009, 2012) and demography of orchid populations. 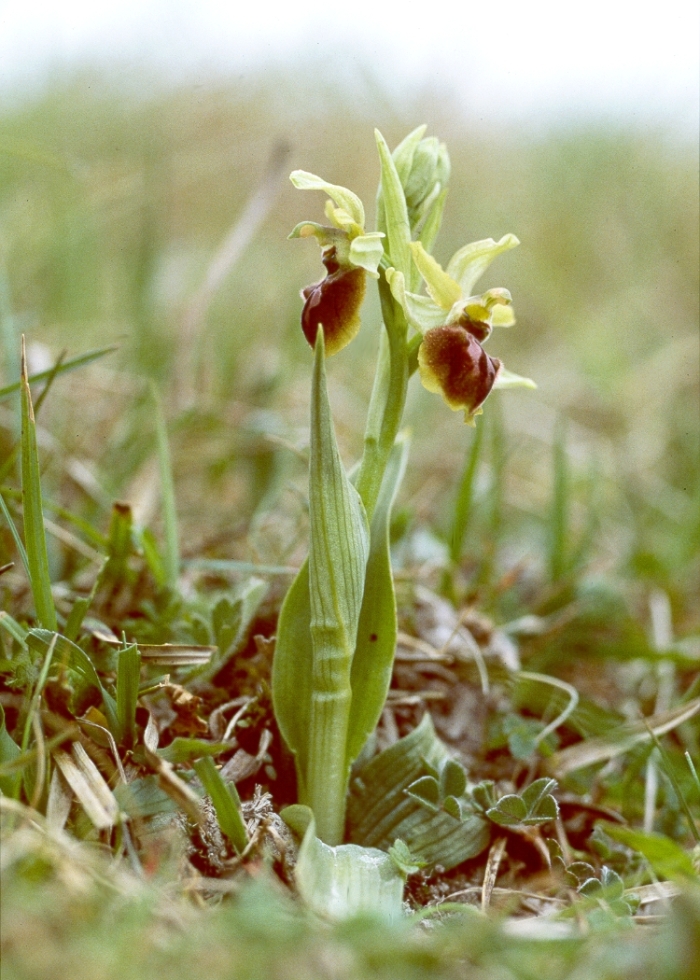 Despite – and perhaps also because of – these difficulties, orchid demographic studies tend to be the longest demographic studies in ecology and they usually have considerable sample sizes. Mike Hutchings’ study on the demography of the early spider orchid (Ophrys sphegodes) is probably one of the longest plant demographic studies to have been carried out so far (Hutchings 2010). Datasets such as this one are rare, and give unprecedented insights into the demography of the species. With the climate changing at an ever faster rate, this and other long-term datasets will become invaluable sources of knowledge as they instantaneously record how plant populations respond to the changing environment (Robbirt et al. 2011). With the advancement of new data analysis techniques such as matrix models and integral projection models (Jacquemyn et al. 2010; Diez et al. 2014), and the inclusion of eco-evolutionary dynamics in population models (Williams et al. 2015), we are starting to get a better grip on understanding the complex demography of orchids and how it is affected by the environment. Williams et al. (2015), for example, used stochastic integral projection models to investigate whether and how climate change affected the life history of the lady orchid (Orchis purpurea). Their analysis shows that with the increasing frequency of droughts the species will inevitably decline. On the other hand, milder winters and wetter springs will have a positive impact on the long-term viability of populations of the species, so it is still difficult to predict how the species will behave in the future.

Almost 150 years after Darwin published the first edition of his book on orchids, orchids keep on fascinating ecologists and evolutionary biologists. This Virtual Issue of papers published in Journal of Ecology demonstrates the vivid interest of the scientific community in the complex ecological processes that affect the population dynamics of these fascinating species and illustrates how ecologists are advancing our understanding of the ecology and evolution of orchids. We very much hope you enjoy reading these papers brought together in this collection and that orchids continue to be a rich inspiration for future ecological and evolutionary researchers. We also hope that the results of these studies may be of interest to the wider public fascinated by orchids and especially to the practitioners and conservation managers so that they may be used to establish appropriate management regimes that will contribute to the long-term conservation of these species.

Kéry, M. and Gregg, K.B. (2004) Demographic analysis of dormancy and survival in the terrestrial orchid Cypripedium reginae. Journal of Ecology, 92, 686-695.

Robbirt, K.M., Davy, A.J., Hutchings, M.J. & Roberts, D.L. (2011) Validation of biological collections as a source of phenological data for use in climate change studies: a case study with the orchid Ophrys sphegodes. Journal of Ecology, 99, 235-241.

One thought on “Charismatic Orchids”