Volume 104 Issue 6 of Journal of Ecology is now online! 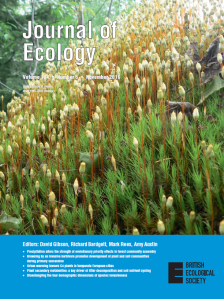 Included in these papers is an interesting study by Mousing et al. showing that small changes in ocean salinity and temperature can significantly affect the distribution and diversity of phytoplankton. The study generated a lot of media attention and you can read the press release from the University of Copenhagen on the Journal blog. The issue also includes an Open Access paper about plant–soil feedbacks by Cortois et al. which you can read more about in a blog post written by authors Roeland Cortois and Gerlinde De Deyn.

Last month we welcomed some new Associate Editors including Jane Catford, who is the lead author of an Essay Review titled ‘Disentangling the four demographic dimensions of species invasiveness’. Other Associate Editors have also contributed to this issue; Nina Wurzburger co-authored a paper on the mycorrhizal associations of trees, Hans de Kroon was part of a study on Solanum dulcamara, and Roberto Salguero-Gómez was part of a team who have produced a paper titled ‘A demographic ménage à trois: interactions between disturbances both amplify and dampen population dynamics of an endemic plant‘.

This issue’s cover image, taken by Marion Barbé, shows a moss species (Polytrichum commune Hedw.) from a boreal forest in the Abitibi-Témiscamingue region of Quebec, Canada. In the related paper – So close and yet so far away: long distance dispersal events govern bryophyte metacommunity re-assembly – Barbé et al. investigate bryophyte dispersal at the metacommunity level.

The Editor’s Choice paper for this issue is by Brandt et al. and is titled ‘Precipitation alters the strength of evolutionary priority effects in forest community assembly of pteridophytes and angiosperms‘. You can find a commentary on this paper on the blog written by Associate Editor David Edwards and Senior Editor Amy Austin  which also includes some photographs taken by the authors relating to their study.