Julienne Schiebold (University of Bayreuth) has written an article about her recently published paper; Exploiting mycorrhizas in broad daylight: Partial mycoheterotrophy is a common nutritional strategy in meadow orchids.

With approximately 28,000 species, the Orchidaceae is often referred to as the largest plant family. Regardless of their geographical occurrence or life form, all orchid species are characterised by intricate interactions with their pollinators and mycorrhizal fungi.

Orchids produce large numbers of dust seeds that contain only very small amounts of nutrients and need to be colonised by mycorrhizal fungi and provisioned with nutrients to successfully germinate. While all orchids rely on the strategy of mycoheterotrophy (symbiotic relationship between of plants and fungi) as seedlings, previously it was thought that adult orchids then become autotrophic (self-feeding). However, some orchid species lack chlorophyll at full maturity so satisfy all nutrient demands by exploiting their mycorrhizal fungi in the adult stage as well.

A reliable tool to examine food-web structures and to investigate trophic strategies in plants is stable isotope natural abundance analysis. For example, the tissue of achlorophyllous orchids (completely lacking chlorophyll and hence cheating all their nutrients from their fungal partner) is enriched in 13C as well as in 15N and 2H compared to surrounding autotrophic plants. This isotope enrichment signature is indicative of mycoheterotrophy.

A growing number of green-leaved orchid species thriving under light-limited conditions of forest grounds have been identified to simultaneously utilise both carbon from photosynthesis and a fungal source. These species are partial mycoheterotrophs. The tissue of these orchids consequently exhibits an isotopic signature somewhere in between autotrophic and fully mycoheterotrophic plants.

Nevertheless, the overwhelming majority of chlorophyllous orchid species are associated with rhizoctonia fungi, a polyphyletic group of saprotrophic basidiomycetes, and does not have a clear stable isotope profile. These orchids are characterised by significant 15N enrichment and higher leaf total nitrogen concentrations, but a lack of 13C enrichment, or even 13C depletion relative to autotrophic references. They have been called many things from ‘putatively autotrophs’ to ‘cryptic mycoheterotrophs’, but their true nutritional mode remained unknown until now.

In our recent Journal of Ecology paper we show that the trophic mode of partial mycoheterotrophy plays a far greater role among orchids than previously assumed.

To test our hypothesis that these orchids feature partial mycoheterotrophy as a nutritional mode, we used d2H in addition to the routinely employed d13C and d15N measurements. This followed the reasoning that not only carbon and nitrogen are present in organic molecules that move from fungus to orchid, but also hydrogen atoms. Fungi are enriched in the heavy 2H isotope compared to autotrophic plants because of their heterotrophic mode of nutrition.

We selected an area in the Northern Limestone Alps of Europe with high orchid diversity and sampled a variety of orchid species to test for a general pattern. We sampled 13 orchid species growing in montane meadows, four forest orchid species and 34 autotrophic reference species.

Most orchid species inhabiting sunny meadows lacked 13C enrichment or were significantly depleted in 13C relative to autotrophic references. However, we show significant 2H and 15N enrichment, and high leaf total nitrogen concentrations in the tissue of the majority of rhizoctonia-associated orchid species growing under light-saturated conditions and conclude a partially mycoheterotrophic nutritional mode for these orchids. Pseudorchis albida was the sole autotrophic orchid species in this study as it exhibited neither enrichment in any isotope nor a distinctive leaf nitrogen concentration. 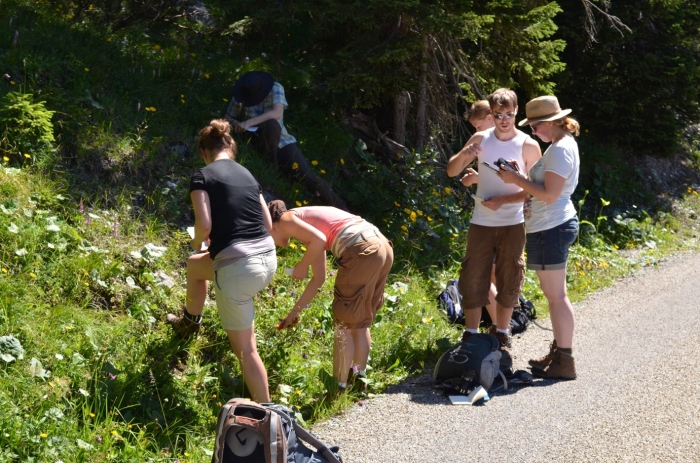 In addition, we find d2H well suited to complement the isotopic tool box for investigating trophic strategies in orchids. Our findings demonstrate that partial mycoheterotrophy is a trophic continuum between the extreme endpoints of autotrophy and full mycoheterotrophy, ranging from marginal to pronounced. In rhizoctonia-associated orchids, partial mycoheterotrophy plays a far greater role than previously assumed, even in full light conditions.