Nina Joffard and colleagues recently had their paper on the pollination niches of orchids accepted in Journal of Ecology. The authors tell us more about their paper below…

Plant-pollinator interactions can be seen as part of species’ ecological niches. One of the major challenges in the study of these interactions is to determine what factors underlie pollination niche similarity between plants, a question that is relevant both to ecology (e.g. to explain plant coexistence) and evolutionary biology (e.g. to explain convergent evolution).

Plants with the same spatial and temporal distribution will have an increased probability to encounter the same regional pool of pollinators, but at a local scale, sympatric plants may compete for the same pollinators, leading to a niche differentiation process. In addition to this, some traits may promote or prevent interactions between some species of plants and some species of pollinators, and because these traits are partly the legacy of ancestors, one may expect a phylogenetic conservatism in plant-pollinator interactions.

In our study, we focused on Euro-Mediterranean orchids, which use diverse strategies to attract pollinators (nectar production, food deception, shelter mimicry and sexual deception, see Fig. 1) and interact with various functional groups of insects.

In these orchids, we investigated the determinants of pollination niche breadth (i.e. which orchids are specialists, which are generalists and why?) and overlap (i.e. which orchids interact with the same pool of pollinators and why?). To this end, we constructed a database reporting 1278 interactions between 243 orchid and 773 pollinator species, and we analysed this database using a network approach (see Fig. 2).

We then investigated the effect of pollination strategy, phylogeny, habitat, geographical range and flowering time on pollination niche similarity between orchids.

Our results show that when orchid-pollinator interactions are considered at the insect family level, this similarity is solely explained by orchid pollination strategy and phylogeny, with consistent associations between some functional or phylogenetic groups of orchids and some families of pollinators. By contrast, when they are considered at the insect species level, this similarity is primarily explained by orchids geographical range and flowering time, suggesting that at a finer scale, orchid-pollinator interactions are more opportunistic than previously thought.

In conclusion, our study shows that pollination niches of Euro-Mediterranean orchids are shaped not only by their traits and phylogenetic history, but also by their distribution (see Fig. 3). 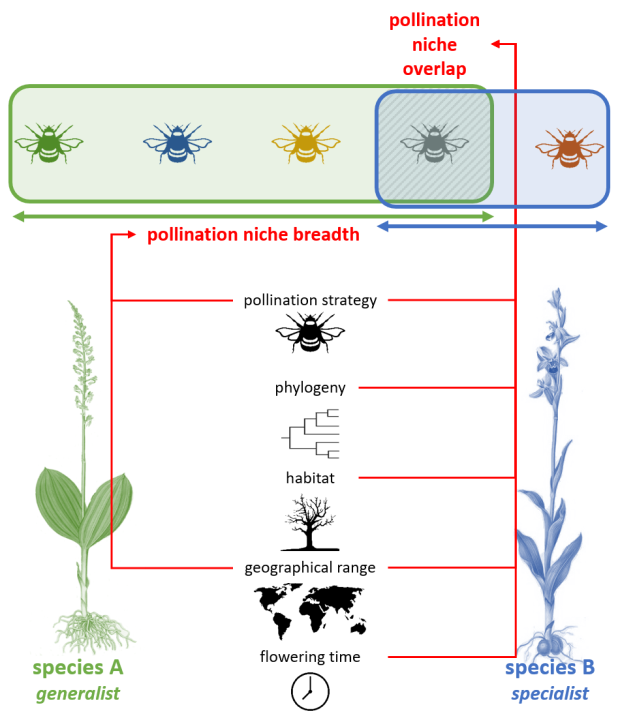 From a conservation perspective, our results show that the most specialist orchids – which may be particularly sensitive to pollinator decline – often have limited geographical ranges as well. In addition to this, they suggest a major role of local adaptation in the diversification of Euro-Mediterranean orchids, underlining the importance of conserving plant-pollinator interactions to conserve an evolutionary potential in this charismatic family.