Often when dead leaves from a plant fall to the ground and begin decomposing, we assume that all leaves from a plant species are equivalent from the perspective of decomposers. This assumption is even formalized in many models of ecosystem processes. However, this view doesn’t consider that many plants make vegetative allocation and chemical choices within an individual that can have legacy effects on the traits of the dead leaves.

In our new paper in Journal of Ecology, we examine how the environment and experiences of goldenrod plants shape how microbes breakdown the dead leaves shed by that plant.

Generally, terrestrial insect herbivores are considered to have a minimal impact on ecosystem processes as they eat ~ 10% or less of the total vegetation. However, even a few chomps from a hungry grasshopper can trigger numerous changes in the over 90% of the plant vegetation that remains. These often overlooked “ghosts of herbivory past” can then cascade to alter decomposition of the plant litter once it dies back for the season. (For more, see this overview – it starts with the great line: “I’ve been thinking a lot lately about death and decomposition. I don’t know if it is an onset of a mid-life crisis….”)

Our work was based in old-field or abandoned agricultural ecosystems in Connecticut, USA (Fig. 1). In mid-succession, these fields are dominated for a few decades by Solidago spp. (here, S. altissma) which after migrating into a newly disturbed site by seed, clonally reproduce every year creating genetically identical patches on the landscape. We previously found that the goldenrod vegetative response to herbivore attack by an important grasshopper in this system (Melanoplus femurrubrum) depends on soil fertility. When grown at high nutrient levels goldenrod genotypes will induce resistance in response to herbivores. However, when we grew clones of the same genotypes in low nutrient conditions there was no induction of resistance and tissue becomes more susceptible/palatable to later herbivores.

Here, we examined whether the different vegetative responses to herbivory that occur at opposite ends of the nutrient gradient have cascading effects on decomposition by microbes when leaves are shed at the end of the growing season (Fig. 2). In other words, can we detect a differential “ghost of herbivory past”?

Indeed, we find strong evidence that the differential induction of plant defenses along the nutrient gradient cascade to alter microbial decomposition of tissue from the same plants. Microbes decompose herbivore-induced tissue 20% more efficiently than control litter at low nutrients (where compensatory growth occurred) but 11% less efficiently than control litter at high nutrients (where defenses were induced). These results mirror the results for herbivores feeding on the same tissue (Fig. 3a) and we can trace the decomposition differences to plastic changes in key vegetative traits post-herbivory. 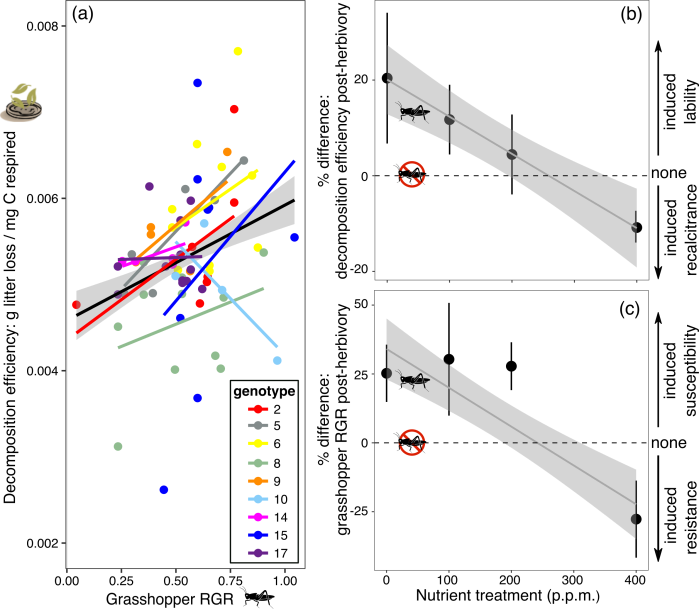 Figure 3: If a plant is palatable to grasshoppers after herbivory then litter from a paired clone of the same genotype is also decomposed more efficiently by the microbial community after herbivory (a). Both herbivores and microbes more efficiently process the green leaves/ dead leaves, respectively, from induced goldenrod grown in low nutrient soil, while the opposite occurs in high nutrient soil (b,c).

Thus, within this system at least, the effect of a herbivore on a downstream ecosystem process (decomposition) is strongly dependent on the soil fertility environment. This illustrates that even clones of the same goldenrod genotype don’t always respond to herbivores in the same way. Grow the clone in fertile soil and grasshopper feeding decelerates decomposition through changes in vegetative traits. Grow the clone in low nutrient soil and grasshoppers accelerate decomposition through different vegetative changes.

Many ecologists are striving to understand how environmental change will alter carbon and nutrient budgets through changes to ecosystem process rates. Species composition of communities is known to be a key driver of these processes and many predictive approaches use a single trait value to represent a species regardless of context. Our study highlights that this approach ignores the ability of the same organism to adjust traits or behavior based on the biotic or abiotic conditions that it encounters during its lifespan. In this system, decomposition dynamics may be strongly driven instead by trait plasticity within the dominant species rather than interspecific differences. Thus, vegetative trait plasticity may be important to consider when building such models.

We hope that the next time you look out over what seems to be a homogenous expanse of goldenrod in a field, you squint and imagine the mosaic of soil fertility and the “ghosts of herbivory past” that will shape decomposition dynamics in the field come fall.