If you are at Evolution 2018 in Montpellier, you can hear more about Matt’s work in his presentation: Food-web complexity alters the fitness landscape of an insect herbivore (Monday 20th August, Auditorium Berlioz, 10.10am, as part of symposium 61, The Evolution of Community Ecology).

Plants provide food and shelter (either directly or indirectly) for virtually all species that live on land, forming the basis of terrestrial ecosystems. These interactions between plants and other species are partly determined by the plant’s traits (i.e. their growth form, shape of their leaves, and chemistry of their tissues).

Lanphere Dunes, the location of this study. The light green plant in the photo is coastal willow (Salix hookeriana), the focal plant of this study (Photo: M Barbour)

We focused our experiment on a common plant species in these dunes; the coastal willow (Salix hookeriana). We knew from prior work that different willow genotypes (genetically unique individuals) interact with different insect herbivores, a result of differences in the growth and chemistry of the willow genotypes (Barbour et al. 2015, 2016). Now we sought to compare the relative importance of the plant’s genotype vs. the variable environment in which it naturally occurs in influencing its traits and the diversity of species it interacts with.

We manipulated two important sources of environmental variation during this study. The first was the interaction between a species of aphid (Aphis farinosa) that feeds on the willow and a common ant species (Formica obscuripes). This aphid feeds on the sap of the willow and in the process excretes a sugary substance called honeydew, which attracts ants that feed on the honeydew (as shown in the aphid-ant interaction video below). We thought that this aphid-ant interaction would have its largest effect when aphids were feeding on willows near an ant colony, since we expected these conditions to favour high aphid densities and thus have a greater impact on willows.

The second environmental factor we manipulated was wind exposure. We noticed that willows growing in wind-exposed habitats grew differently, appearing to be “swept back” by the wind. We thought that wind exposure would be an important source of variation in willow growth and leaf traits, with strong effects on species that depend on the willow for food and shelter. 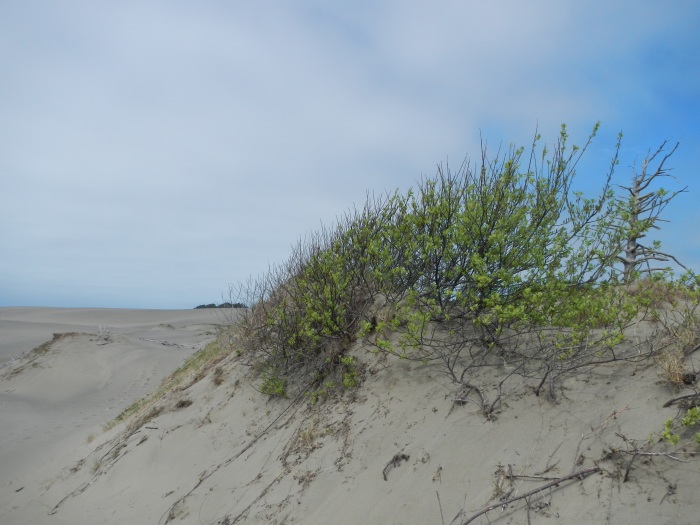 Wind-exposed willow. Note the reduced growth at the leading edge of the plant (Photo: M Barbour)

We conducted separate experiments that manipulated each of these environmental factors for 10 different willow genotypes. We then simultaneously measured trait variation in willow leaves, shoots, and roots, as well as the diversity of foliar arthropods, root fungi and root bacteria found on the willow.

In a broader context, our results suggest that predicting how terrestrial ecosystems will change in the future requires an understanding of not only how the environment affects plant traits, but how this trait variation affects the diverse species that depend on plants for food and shelter.