Cynthia Chang and Ben Turner are the guest editors for our latest special feature: Ecological Succession in a Changing World. Cynthia and Ben tell us more about their special feature and the inspiration behind it, below.

There is no doubt that succession is a foundation of ecology. However, when ecologists talk about succession, it often seems to be in a historical context. This has caused some to ask, “Is succession passé?” The goal of our special feature is to answer with a resounding “No!” and place succession research in a contemporary context, highlighting its relevance in modern ecological theory and pressing applied issues such as global change and restoration research. 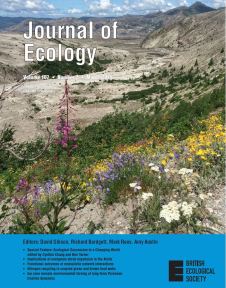 This motivated us to organize a symposium at the Ecological Society of America conference in August 2017, to highlight how studying succession brings new insights into community assembly theory, plant-belowground interactions, and restoration and global change research.

This Journal of Ecology special feature is an expanded result of these efforts. The collection of papers represent a flavor of all the different kinds of contemporary work currently being done on succession. They represent a range of biomes and ecosystems, including everything from tropical forests, volcanic landscapes, glacier retreats, grasslands, and old-fields.

This special feature presents 11 articles and an editorial that encompass 4 main themes:

Overall, these studies highlight the relevance of succession to modern ecological theory and novel ways for succession research to be applied to important societal issues in a rapidly changing world. Our hope is that this special issue not only highlights the continued value and relevance of successional research, but also encourages future research to be better integrated into relevant global change issues.

Read the latest issue of Journal of Ecology online, including Cynthia and Ben’s special feature: Ecological Succession in a Changing World.

One thought on “Special Feature: Ecological Succession in a Changing World”