Grasslands are the most extensive terrestrial biome, and have the largest total global accumulation of soil carbon. Grasslands and their ecotonal neighbours the savannas, have been the crucible for much of human history and activity.  However, despite being lauded and loved because of their charismatic megafauna (e.g., lions in African grasslands and savannas, bison in North American prairie) and spectacular open vistas, grasslands have in many parts of the globe been extensively fragmented and ploughed up, and replaced with row crop agriculture. Nowadays however, an emerging global threat to grasslands is climate change. 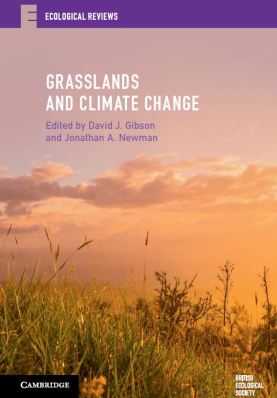 How susceptible are grasslands to climate change? The North American grasslands were described by Richard Manning as the “great empty middle of our continent” and by Charles Dickens in American Notes as “oppressive in its barren monotony”. The relative flatness and the frequency of periodic droughts and fire encourage relatively easy movement and dispersal of their fauna and flora across the landscape. Indeed, the migratory habits of the megafauna across large areas in response to seasonal climate change is a familiar phenomenon. The central North American grasslands were described metaphorically in 1964 by Ralph Dix as a “palimpsest” as they responded to thousands of years of glacial advances and retreats. But, the latest report (IPCC 2018) suggests that climate change is currently occurring in a much shorter period of time and more rapidly than that of a glacial advance or retreat. We are seeing many signals of ongoing change (e.g., advances in phenology). How will grasslands respond to this ecologically rapid threat?

As authors of separate books on grasslands and climate change, and with the encouragement of the British Ecological Society’s Ecological Reviews board, Jonathan Newman and I edited the new volume Grasslands and Climate Change. We invited an international and diverse team of 28 grassland ecologists to join us in addressing the question posed above. We challenged the authors to think about how ecologists should address the issue of climate change in grasslands, what changes are already occurring, and what we can do to deal with these changes. We divided the challenge up into 19 somewhat overlapping topics in three parts.

We set the stage in the Introduction and consider how ecologists measure climate change in grasslands. Chapters in Part I assess how climate change will impact the distribution of grasslands, their production, biogeochemical cycling, and ecosystem services. In Part II, the authors consider the consequences for the spread of invasive species, demographic change, trophic-level relationships, soil biota, and evolutionary change on biodiversity. Part III considers how ecologists can respond to climate change in grasslands by focusing on grazing systems, the cultural context, range management, and restoration. In our wrap-up final chapter, we drew together the research and conservation needs of grasslands in context of the Anthropocene era that we now find ourselves in.

To preserve grasslands, or restore them in many areas, it is clear from research summarized in this book that we need a better understanding of the uncertainties associated with the driving forces that will impact grasslands under climate change, we need more well-replicated, long-term experiments carried out across different grasslands, and we need to better connect, often surprising results, with theory through syntheses, reviews, and meta-analyses. As evident in the chapters in this book, ecologists are up for this challenge.

Grasslands and Climate Change is part of the Ecological Reviews series. BES members get 25% off all titles in the series when buying directly from Cambridge University Press. See also, Jonathan Newman’s article post about our book on the CUP blog Fifteen Eightyfour.

10 thoughts on “Grasslands and Climate Change”