Mark St. John and company have a paper in the Journal in volume 100:5 titled “Loss of a dominant nitrogen-fixing shrub in primary succession: consequences for plant and below-ground communities”.  Read the abstract here.

The authors have provided a short synopsis of the paper and a few photos. 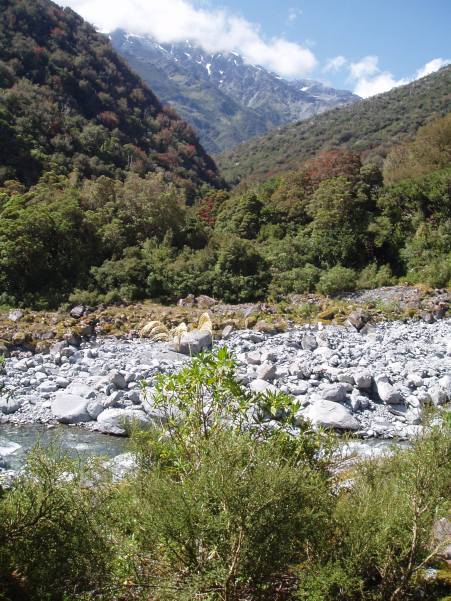 Many ecosystems throughout the world are gaining some species and losing others, and this is leading to large shifts in community composition. Plants with symbionts that fix atmospheric nitrogen (nitrogen-fixers) are major ecosystem drivers but environmental changes caused by humans can lead to their loss. The impacts of this loss have seldom been studied. In New Zealand, the gain of some invasive herbivorous mammals, such as goats, hares, and chamois which have been introduced since European settlement in the 19th century, leads to the loss of nitrogen-fixing shrubs that are pioneers during primary successions, which are widespread on river floodplains, landslides, and dunes.

We studied the consequences of losing a nitrogen-fixing shrub on denuded surfaces caused by river floods and landslides in a remote valley in New Zealand’s South Island. We set up and maintained a removal experiment over 10 years, with a nitrogen-fixing deciduous legume shrub, Carmichaelia odorata, either left intact or removed to represent the effects that invasive herbivorous mammals could cause under high densities. This shrub is the only common nitrogen-fixing plant in the valley and it is a major component of the diet of chamois, a mountain goat introduced to New Zealand from Austria for trophy hunting.

After 10 years, removal of Carmichaelia odorata resulted in a 7-fold reduction of woody plant biomass, although it had no effect on the shorter non-woody vegetation. Concentrations of nitrogen in the leaves of two woody species were also reduced. Below ground, the effects of removing Carmichaelia odorata included large reductions in the concentrations of carbon and nitrogen in the young soils.  The biomass or the abundance of several groups of soil biota were also much reduced, these groups included those that depend on roots, soil bacteria, or fungi. Soil invertebrates that depend on bacteria were particularly adversely affected. In short, both above and belowground, Carmichaelia odorata had either positive or neutral effects on all co-occurring species, and its removal caused a much reduced amount of biomass and often less diverse communities to develop.

Our results therefore show that the loss of a single functionally distinct plant species, such as occurs through herbivore invasion, can cause substantial effects both above-ground and below-ground. This may affect how an ecosystem might develop over time, especially on young soils with very low soil carbon and nitrogen reservoirs. The simultaneous gains of some organisms (e.g. invasive herbivorous mammals) and resultant losses of others (e.g. palatable N-fixing plants) are a major component of global change caused by people and they are likely to be transforming many communities and ecosystems worldwide.

One thought on “What are the consequence of losing nitrogen-fixing shrubs?”