Adam Lovas-Kiss (University of Debrecen), Andy Green (Doñana Biological Station) and colleagues recently had a paper published in Journal of Ecology entitled “Endozoochory of aquatic ferns and angiosperms by mallards in Central Europe”. Andy tells us more about the paper below.

People are generally very keen on mallards and other ducks, especially feeding them in the local pond, watching them in nature reserves, or hunting them for food. However, neither botanists nor ornithologists have paid much attention to their importance for seed dispersal, focusing instead on the importance of frugivorous birds such as thrushes and other songbirds. Our paper illustrates just how important dabbling ducks can be as vectors for a broad range of plants.

By collecting droppings from mallards on autumn migration in Hungarian wetlands, we recovered seeds of 21 angiosperm taxa that had survived gut passage intact, and so were dispersed by “endozoochory” as a consequence of incomplete digestion. Seeds of eight of these taxa were germinated in the lab, confirming their viability. This included the most abundant taxa which were aquatic plants such as sago pondweed Potamogeton pectinatus or the alkali bulrush Bolboschoenus maritimus.

One of the study sites was Lake Balaton in Hungary, which is the largest freshwater lake in central Europe (Photo: Ádam Lovas-Kiss)

It was already well established that these aquatic plants disperse via waterbirds (Green et al. 2016), but most of the plants recorded were actually terrestrial plants, many of which were not previously known to be part of the diet of ducks. Previously in Journal of Ecology, Soons et al. (2016) identified 450 plants in Europe whose seeds have been recorded during diet studies of ducks. Our paper shows that this list remains very incomplete, and suggests that ducks probably disperse thousands of angiosperm species in Europe.

Trees whose seeds we recorded included the alien hackberry Celtis occidentalis. This underlines the importance of ducks as vectors of many kinds of plants whose seeds are available to them as food items around the margins of lakes or rivers, often after being blown or washed into the water by wind and rain.  Furthermore, we show that based on their morphology, most of these plants are traditionally assigned to syndromes indicating dispersal by wind, water or simply by falling off the plant. 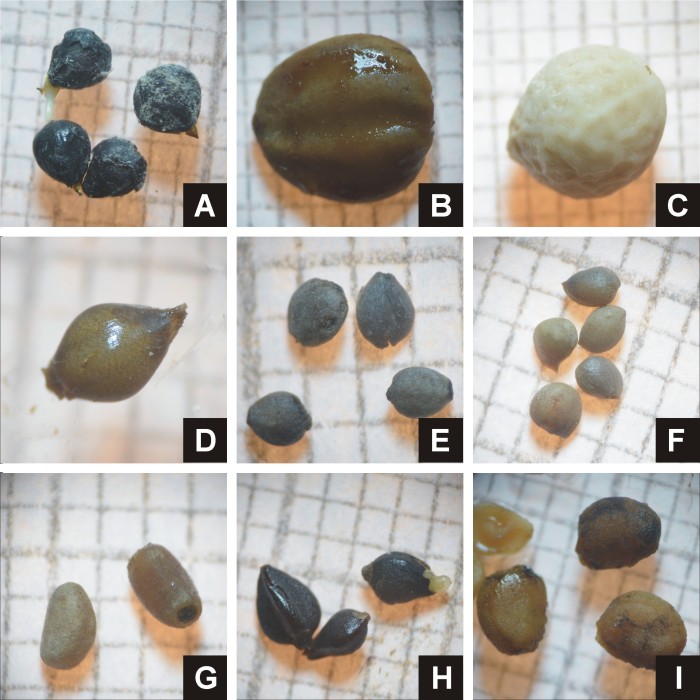 Propagules collected by the team – see the full paper for more details.

Our study shows how ducks can be vital for long-distance dispersal for these plants, since these alternative mechanisms cannot provide dispersal events over such a long distance as those available inside a migrating duck. Curiously, the most abundant seeds of all in our study were those of the common fig Ficus carica, but the seeds of this cultivar are not viable in Hungary.

One unique aspect of our study is our success in identifying the small numbers of seeds recorded for most of the taxa. In turn, this allowed us to compare the community of plants dispersed by ducks in four different locations in two regions of Hungary, and show that there are important differences, especially at the regional level. This has been shown many times for frugivores, but this the first study of its kind for granivorous waterbirds. So our work gives a unique insight into the networks of dispersal interactions between the local flora and ducks in different areas.

Another novel and important finding is that we confirm for the first time that birds disperse ferns by endozoochory. Nearly 400 megaspores of the floating fern Salvinia natans were recovered from 32 birds, and 5% of these were germinated in the lab. For a long time there have been suspicions that waterbirds spread floating ferns around, and Henry Ridley suggested in his seminal book on plant dispersal (Ridley 1930) that they spread the alien fern Azolla filiculoides between waterbodies in the UK. However, he suspected that ferns are spread on the feet or feathers of ducks, i.e. by “epizoochory”. In the Origin of Species, Darwin referred to the epizoochory of duckweed Lemna by ducks, and since then the importance of epizoochory has been generally overstated. Darwin did not notice the widespread ability of small plant diaspores to survive gut passage through waterbirds, and several recent studies have confirmed that endozoochory by ducks is more frequent than epizoochory (Reynolds & Cumming 2016).

In our paper we even found Lemna minor seeds in mallard droppings. Aquatic ferns including Azolla are often ingested by waterbirds and our paper suggests that migratory birds are important overlooked vectors for ferns. Coupled with a recent demonstration that mallards disperse viable fragments of bryophytes (Wilkinson et al. 2017), our findings underline the need to pay much more attention to the dispersal interactions between plants and waterbirds.

You can also read a press release for this paper: Duck faeces shed light on plant seed dispersal, and the full paper: Endozoochory of aquatic ferns and angiosperms by mallards in Central Europe

One thought on “Ducks disperse more than duckweed”