Mandy Slate (Rocky Mountain Research Station, USA) tells us more about her recent Journal of Ecology paper on the topic of resource loss from mosses during rehydration and how it can affect soil carbon and nitrogen…

Mosses are prevalent in ecosystems worldwide and while well recognized as ecologically important, their unique physiology may influence ecosystems in ways not previously understood.  This is because unlike vascular plants, non-vascular mosses can frequently and rapidly fluctuate through cycles of desiccation and rehydration. During these transitions, their cellular integrity is compromised and intra-cellular contents (carbohydrates, amino acids, and ionic compounds) are lost (Carleton & Read, 1991; Coxson, 1991; Bach et al., 2009).

Our understanding of how mosses influence communities and ecosystems has thus far not accounted for these “bryotic” pulses of resources lost from mosses during rehydration. In our new Journal of Ecology paper, we use a greenhouse and laboratory experiment to evaluate resource loss from mosses during rehydration and look into the effects of these resources on soil carbon and nitrogen. 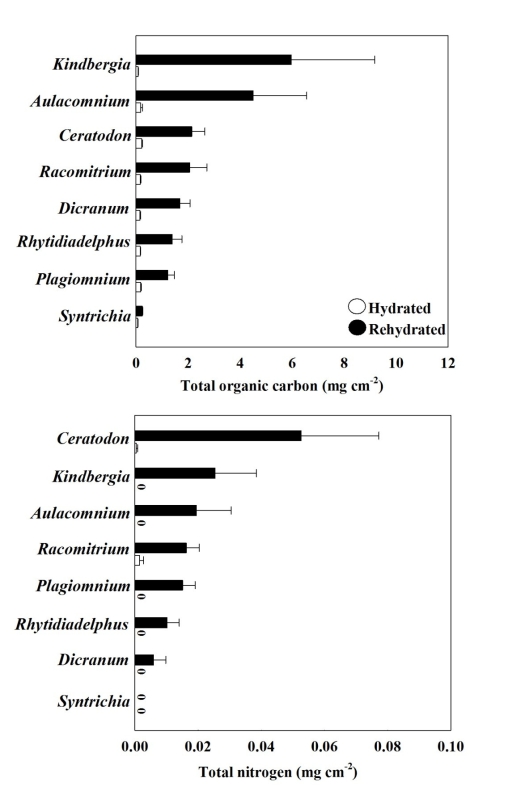 Interestingly, we found that the intensity of the effects of throughfall from hydrated and rehydrated mosses on soil gas efflux varied among moss species, and in a manner that suggests that the quantity and quality of carbon and nitrogen compounds carried in moss throughfall may drive variation in the effects of throughfall on soil biota and subsequently soil carbon and nitrogen pools (Fig 2). However, we caution that our laboratory results must be followed by field measurements in order to provide more evidence that this mechanism is equally strong in natural ecosystems.

Once we know the extent to which this process happens in a natural setting, we will examine how the release of resources during moss rehydration may influence biotic interactions.  In arid and semi-arid systems in particular where mosses co-occur with lichen and cyanobacteria in biological soil crusts, plant and soil biota activity is limited to the brief period of hydration following precipitation (Austin et al., 2004; Collins et al., 2008) that will simultaneously drive this release of carbon and nitrogen from mosses. Soil microbial activity directly regulates nutrient availability and primary productivity. Therefore, when moss rehydration coincides with periods of vascular plant growth and microbial re-activation bryotic pulses may influence above and belowground communities.