Laura Galloway and Kevin Burgess have a paper in Early View in the Journal titled “Artificial selection on flowering time: influence on reproductive phenology across natural light environments “.  Read it here.

The authors have provided a short synopsis of the paper and an nice photo of the  plant species they studied. 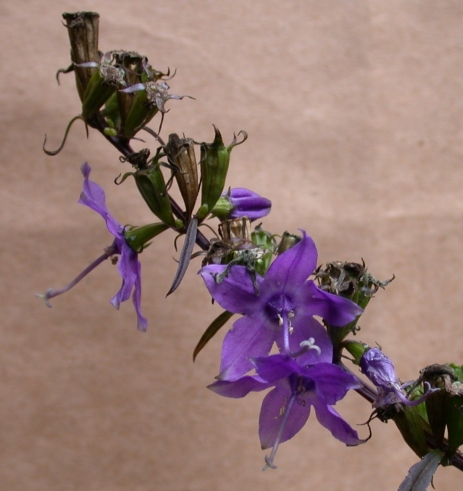 Many plants are flowering earlier in response to warmer climates.  Warmer climates may also favour genetic changes in the timing of flowering.  We mimicked potential evolution in response to climate change by artificially selecting for early and late initiation of flowering in the woodland herb, American bellflower.  We found that plants that had evolved to flower early also advanced the production of subsequent flowers, fruit maturation and seed dispersal.  Furthermore, plants genetically manipulated to flower late delayed the production of subsequent flowers, fruit maturation and seed dispersal.  Because timing of seed dispersal can influence offspring germination time, survival and growth, the evolution of flowering time in response to warmer climates may have cascading effects throughout the life cycle.  However, when these plants were grown in the forest understorey, they flowered later but accelerated subsequent flower production, fruit maturation and the end of reproduction relative to plants in light gaps.  Here, the later start to flowering was compensated for by a condensed reproductive period.  In total, genetically-based changes in timing of flowering were more likely to have life-cycle effects than plastic responses to local habitats.  We are currently comparing flowering time and potential cascading effects in populations from different climates.